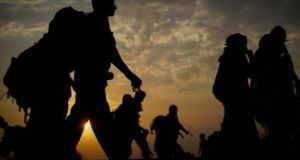 A group of 23 Albanian and Georgian nationals has been deported in an Irish-led operation involving the EU’s border agency, the Department of Justice has said. File image: Getty.

A group of 23 Albanian and Georgian nationals has been deported in an Irish-led operation involving the EU’s border agency, the Department of Justice has said.

The group, comprised of 19 men and four women, were flown out of Ireland on a flight organised by Frontex in co-operation with Belgium and Iceland.

The department voiced its “concern” earlier this year in response to queries from The Irish Times about Albanian and Georgian people accounting for a significant proportion of those seeking international protection.

Taoiseach Leo Varadkar last month said that while Ireland was not being “swamped” with asylum seekers, large numbers of Albanians and Georgians were entering Ireland using fake documents and then seeking international protection.

Some 41 per cent of all asylum applications in the first half of the year were from Albania, Georgia and South Africa - three countries officially regarded as “safe countries of origin” by Ireland.

This means the State considers them as safe and stable democracies and asylum seeker from such countries are much less likely to be granted leave to remain.

The decision by Ireland to lead a Frontex operation to deport the 23 people and then to publicise it will be widely interpreted as a publicity exercise aimed at dissuading people from those countries considering coming to the State.

The flight departed Dublin and stopped in Iceland and Belgium where more Albanian and Georgian nationals were picked up. It had planned stops in Tirana, Albania, and Tbilisi, Georgia, the department said.

“Enforced removals are carried out as a measure of last resort when the person concerned has not removed themselves from the State or engaged with the International Office for Migration (IOM) to avail of assisted voluntary return measures,” the department said.

“They were accompanied on the Frontex-chartered flight by two medical staff and two Frontex monitors, as well as officers from the Garda National Immigration Bureau (GNIB).”

Frontex, which is based in Warsaw, Poland, coordinates activity between EU member states in managing external borders and also offers practical advice in organising multinational deportations like that from Dublin on Wednesday.