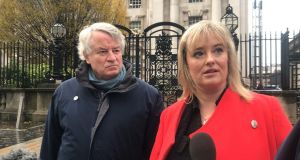 Mairia Cahill has welcomed a commitment by the secretary of state and the chief electoral officer to change the law in Northern Ireland over the requirement for local election candidates to disclose their home address.

The former SDLP councillor brought the legal challenge after she was forced to pull out of the Northern Ireland local elections earlier this year over fears for her safety.

Ms Cahill said there is a court order in place to protect her from violence and that the current law breaches the rights of victims of domestic abuse.

The High Court in Belfast heard that there is cross-party support to change the electoral rules for local elections which states that candidates have to make their address public.

The law does not apply to candidates running for Assembly and Westminster elections.

Ms Cahill, who was co-opted onto the Lisburn and Castlereagh Council as an SDLP councillor, is being supported by the Northern Ireland Human Rights Commission (NIHRC) in her case.

The High Court heard that the issue was due to be tabled before Westminster on November 21st, however it was postponed because of the upcoming general election.

Tony McGleenan QC, representing the Northern Ireland Office and chief electoral officer, told the court that the challenges to the law has full party support.

He asked the court for the matter to be postponed until early next year.

“This court has a busy list and this is by no means urgent and will be only be detriment to the applicant in the event of a local election and none are scheduled,” Mr McGleenan said.

Mrs Justice Keegan said it is “very helpful” that there is no dispute to the “important issue”.

NIHRC barrister Steven McQuitty said the detriment has already been caused because Ms Cahill was forced to pull out of the electoral race.

Mr McQuitty asked for the court to grant leave to help “focus minds” in a bid to resolve the case.

Justice Keegan said: “It is unfortunate that the particular timetable does not allow for the changes to take place but I am told that it will be back on the agenda after the General election.”

Speaking after the hearing, Ms Cahill said: “I think it’s a positive move in one sense in that there is a commitment that this law should change and therefore there should be recognition that detriment has been done to myself as a result.

“This case would not have taken place had I had not been in that position.

“I don’t understand how this government or administration can give a commitment that this will change in the next parliament given that proposed bills fall once parliament falls, so I think the next step is to wait until the next administration is up and running and for them to reaffirm that commitment and also to recognise that harm has been done to anyone effected by this discriminatory law in the past.

“The proposed change to the law would not have happened had we not forced this issue and taken the case.

“I think it’s very unfortunate because they have had six months now from the point in which they were made aware, it hasn’t been done and this case could have been avoided when we wrote to them.

“I will be happy if the changes ensure that no one else is forced to chose between their safety and running for public office in the future.”

The next court hearing has been set for February 3rd.

Chief commissioner Les Allamby said: “The Commission believes Mairia’s human rights have been breached and that the current law is incompatible with the Human Rights Act.

“We therefore welcome the decision of the court today who acknowledged the importance of this case.

“We want to find a resolution to this case for Mairia and anyone else who might find themselves in similar circumstances in the future.

“In the Commission’s view, being able to put yourself forward for election locally is a fundamental part of our democracy.

“The requirement for an individual’s name and address to be published disproportionately affects the right to privacy and may impact on their ability to stand in a local election.”–PA

3:16 Remains of 19 women who died at mother and baby home remain missing