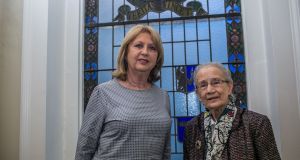 Women have had to listen to “some shocking sexist piffle” over the generations to justify their exclusion “from everywhere except the kitchen”, former president Mary McAleese has said.

The removal 100 years ago of a ban on women entering the law and other professions heralded a “very limited and slow-burning” revolution which met resistance and took almost a century to realise, she said.

Now, half of solicitors in Ireland are women and the profession of barrister is heading in the same direction, well ahead of other jurisdictions, she said. Gender parity is worth celebrating but, she stressed, there is “still a distance to be travelled before gender parity becomes gender balance and equality at every level”.

Dr McAleese was addressing a gala dinner in Dublin on Saturday hosted by the King's Inns in collaboration with the Law Society, the Bar of Ireland and the Irish Women Lawyers Association to celebrate the centenary of the Sex Disqualification (Removal) Act 1919, which removed the ban on woman entering the law and other professions and the senior ranks of the civil service.

The Act, she said, “did not herald the establishment of an immediate egalitarian meritocracy” as it envisaged no mechanism by which the revolution could be effected other than the momentum created by women themselves who would require a “special kind of courage and confidence and a well to do background”.

They had to confront “the disapproval of their own elitist peers, both male and female”, and “chip away at the infrastructure of paternalistic, patronising and dismissive attitudes to women” which no Act of parliament could demolish overnight “even if it wanted to, which it did not”.

The “invasion” of women into the law, predicted 100 years ago by The Irish Times when Fay Kyle from Belfast and Averil Deverell from near Dublin entered the King’s Inns, becoming the first women barristers in the world, did not materialise, she said.

The transformation in the fortunes of numbers of women in law did not get “a real wind” until the late 20th century and the entry of young women from much less homogenous backgrounds.

Dr McAleese recalled, when she was a law student in 1969, there were no women practising at the bar in Northern Ireland. In 1974, when she and two other women were called to the bar, the Lord Chief Justice presented them with Learning the Law by Glanville Williams which, in a chapter entitled Women, said “an advocate’s task is essentially combative whereas women are not generally prepared to give battle unless they are annoyed” and “a woman’s voice does not carry as well as a man’s”.

Being given such “shocking sexist piffle” would not happen today because the invasion has arrived at last, she said. It has taken an entire century and, unlike most invasions, has brought about “a welcome assault on the sexist prejudices and structures which kept women and entire cultures in a sorry state of wasted talent and under-achievement”.

She paid tribute to the women who helped open the door “that let the future in to the coming generations of women”.