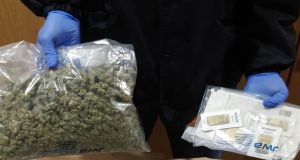 Part of the Garda haul following the raid.

Gold bars, dozens of bottles of high-end wine and assorted drugs were seized during a Garda raid on a house in Dublin on Thursday.

Gardaí from the South Central Divisional Drugs Unit at Kevin Street Garda station secured a warrant to search a residence in the Inchicore area.

They found four 50g gold bars worth €10,000 among drugs that included cannabis herb, cocaine and a quantity of MDMA, all valued at about €15,000.

Other items seized were “elements of a cannabis grow house”, a large but unspecified amount of cash and more than 200 bottles of “high-value wines and spirits” worth about €20,000.

A man in his early 30s was arrested at the scene and brought to Kevin Street Garda station.