Disclosures Tribunal: Who are the key players? 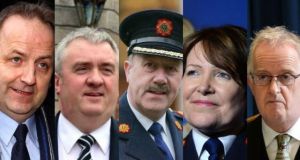 Maurice McCabe was the station sergeant in Balieborough, Co Cavan, in 2012 when he, along with fellow whistleblower John Wilson, made allegations of widespread abuse of the penalty points system. He alleged that gardaí regularly improperly quashed penalty points, including for well-known public figures.

He also made other allegations of Garda malpractice, including a failure to properly investigate a serious assault. Around this time, his access to the Garda Pulse system was restricted by management.

In 2014, a review by barrister Sean Guerin found that then minister for justice Alan Shatter had failed to properly investigate the sergeant’s allegations. The government then set up the O’Higgins Commission to conduct an in-depth inquiry into the penalty points matter.

Shortly afterwards, Tusla, the Child and Family Agency, contacted Sgt McCabe informing him an investigation was taking place into allegations he had seriously sexually abused a child. It later emerged there had been a mix-up in the files and that no such allegation existed.

Sgt McCabe gave evidence to the O’Higgins Commission that his motivation for making the penalty points allegations was attacked by lawyers for then Garda commissioner Noirín O’Sullivan.

The alleged legal strategy taken by Ms O’Sullivan, combined with allegations that senior gardaí had set out to smear Sgt McCabe to politicians and the press, led to the Government establishing the Disclosures Tribunal, chaired by Mr Justice Peter Charleton.

During his evidence at the tribunal, Sgt McCabe said he had been informed by the former head of the Garda Press Office, Supt Dave Taylor, that former commissioner Martin Callinan had compiled many texts falsely claiming Sgt McCabe was a sexual abuser.

These texts were then sent to journalists, senior gardaí and politicians in an “orchestrated campaign” to “destroy him”, Sgt McCabe said.

In 2014 Mr Callinan was called before the Oireachtas Public Accounts Committee to answer questions on the issue. He told committee members only two gardaí out of 13,000 were making allegations and he believed their actions were “disgusting”.

The “disgusting” comment added fuel to the fire and led to immediate calls for his resignation. Mr Callinan said the remark referred to leaking of details of the penalty points scandal and not the whistleblowers’ character. Two months later, then minister for transport Leo Varadkar called on him to withdraw the remark but added he still had full confidence in the commissioner.

Two days later, Mr Callinan stepped down over a separate controversy involving the taping of phone calls into Garda stations. His resignation came about immediately after then taoiseach Enda Kenny sent a senior civil servant to his home to speak to him. Mr Kenny later denied he had “sacked” the commissioner.

At the Charlton tribunal earlier this year, Mr Callinan strongly denied claims made by his former press officer Supt Dave Taylor that he had orchestrated a smear campaign against Maurice McCabe.

Mr Callinan claimed Supt Taylor was making the allegations against him because of a grudge over being moved from the Press Office to the traffic corps.

Supt Dave Taylor served as head of the Garda Press Office under Martin Callinan and later Nóirín O’Sullivan. He was later transferred to the traffic corps before being arrested in 2015 on a charge of unauthorised disclosure of information to the press.

The arrest came after a six-month investigation by Nóirín O’Sullivan’s husband, Supt Jim McGowan, into allegations he illegally leaked details of gardaí taking two Roma children away from their family over misplaced child welfare concerns. Supt Taylor was suspended from work for two years.

In 2017 the Director of Public Prosecutions ordered the charges be dropped and Supt Taylor returned to work in the traffic corps.

In his evidence to the Charleton tribunal, Supt Taylor said between 2012 and 2014 he was under instruction from the then Garda commissioner, Martin Callinan, to brief journalists against Sgt McCabe.

However, Supt Taylor denied evidence given by Sgt McCabe that he had been instructed to send hundreds or thousands of texts smearing the whistleblower. Supt Taylor said the briefings were “opportunistic” and occurred on the sidelines of crime scenes and press conferences.

Some journalists denied receiving any briefings against Sgt McCabe, while others said they were briefed via text message by Supt Taylor.

Noirín O’Sullivan took over from Martin Callinan as acting commissioner in 2014 following the latter’s resignation in the midst of the penalty points scandal. The appointment was later made permanent.

During her tenure, Ms O’Sullivan dealt with a seemingly unending series of Garda scandals, including the over-reporting of breath tests and financial mismanagement at the Garda College in Templemore.

She was also accused of having knowledge of the smear campaign against whistleblower Sgt McCabe. Sgt McCabe alleged she was aware of the plan to smear him to the press and politicians while she was Mr Callinan’s deputy. She denied this.

She was accused of instructing Garda lawyers during the O’Higgins Commission to question Sgt McCabe’s motives when he blew the whistle on the penalty points issue. This accusation was one of the lines of inquiry for the Charlton tribunal.

Supreme Court judge Mr Justice Peter Charleton was assigned to the disclosures matter in 2016 when it was expected to be a limited commission of inquiry which would be held behind closed doors and take no more than a few weeks.

However, as the allegations became more numerous and more complex, it was decided a full tribunal would be needed. From the first hearing in February 2017 Mr Justice Charleton was anxious to move swiftly and avoid a repeat of the lengthy and expensive Mahon and Moriarty tribunals.

He set a rigorous timetable with the aim of concluding hearings before the end of 2017. In the end, the public portion continued until June 2018.

The judge ran proceedings with a firm hand and was not shy about challenging evidence he found improbable or convoluted. He became particularly frustrated in dealing with claims of journalistic privilege invoked by several reporters.

At times his exasperation got the better of him and it appeared he sometimes questioned the usefulness of holding an expensive public tribunal into matters perhaps better suited to a shorter commission of investigation.

“Why are we here?” Mr Justice Charleton asked in the middle of one module. “This has now gone on for two months.”

The Disclosures Tribunal is not over. It will resume in 2019 to deal with other Garda whistleblowers who allege they have been the subject of smear campaigns. However, Mr Justice Charleton will not be the chair. He will return to the Supreme Court while Mr Justice Sean Ryan takes over.