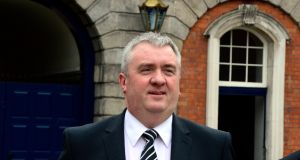 The former head of the Garda Press Office, Supt Dave Taylor, lied to the tribunal and swore an affidavit to the High Court that was “entirely made up of nothing but lies”, the Disclosures Tribunal has said.

Supt Taylor is still a serving member of the force, working in the traffic corps in Dublin Castle. Last year he applied unsuccessfully for promotion.

After being moved from the Press Office by then commissioner Noirín O’Sullivan, Supt Taylor was “suffused in bitterness against her”, and acted with “viciousness”.

Claims by Supt Taylor that Ms O’Sullivan knew about a smear campaign against whistleblower Sgt Maurice McCabe have been rejected by the tribunal.

Mr Justice Peter Charleton said in a tribunal report published on Thursday that it was an “utter mystery” why former commissioner Martin Callinan had chosen Supt Taylor as his press officer.

The tribunal was told the appointment happened because Supt Taylor was “talented, experienced, articulate and so on. He is not. All of this is just plain untrue,” Mr Justice Charleton said.

He said the superintendent was not happy when he was moved by Mr Callinan’s successor, Ms O’Sullivan, to the traffic corps, and not promoted.

During subsequent legal proceedings taken by Supt Taylor in relation to a disciplinary matter, he swore an affidavit “that was an almost entirely made up of nothing but lies”, Mr Justice Charleton said.

The disciplinary proceedings were dropped by Garda HQ “for some unexplained reason” in February of this year, the judge noted. Even though he had asked for the reason why, Garda HQ had not told him.

He expressed the view that the complex procedures required to remove a member of An Garda Síochána from their job are “a disaster for the country”.

During 2016, when he was suspended from duty, Supt Taylor made a protected disclosure in which he alleged he had been ordered by Mr Callinan and Ms O’Sullivan to smear Sgt McCabe while head of the press office.

Supt Taylor made a statement to the tribunal concerning the nature of text messages he sent to Mr Callinan and his then deputy, Ms O’Sullivan, during his time in the press office, which was untrue, the tribunal found.

“It is deceitful in the sense that he had previously said the opposite and, that lie having achieved its purpose of making him appear the innocent victim of a campaign from Garda HQ, public sympathy having restored him to his job, Supt Dave Taylor could throw away his prior allegations as if he never made them.”

In his evidence to the tribunal, Supt Taylor said his smearing of Sgt McCabe was always done verbally, even though he had said earlier to others that it had been done by way of text messages.

Supt Taylor said in evidence that his references to others about text messages had been to “updates” about Sgt McCabe he had been sending to Mr Callinan and Ms O’Sullivan.

Mr Justice Charleton said he did not accept this “transparently deceitful testimony”.

He said that when making claims to others about a smear campaign involving text messages, Supt Taylor, who was facing disciplinary charges and possibly criminal charges for leaking sensitive Garda information, “had an agenda”.

During this period Supt Taylor also alleged that Garda HQ had sought to plant evidence on his phone and that phones that had been seized from him were tampered with.

“This was a lie,” the judge said. When he was questioned about these matters at the tribunal, Supt Taylor sought to explain the deception “through further lies”.

“What might be regarded as upsetting in all of this is the extent to which Supt Taylor was able to dress up lies in a legal syrup that cloyingly garnered public sympathy. He apparently succeeded in garnering public sympathy through the manipulation of the media and he also managed to hold onto his career through deceit.”