Darndale murder victim was wheeling his child in buggy when shot 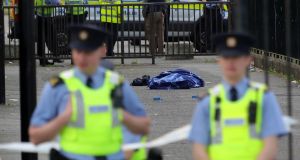 The body lies at the scene of a fatal gun attack in the grounds of the Church of Our Lady Immaculate, Darndale. Photograph: Colin Keegan/Collins Dublin.

The man who was shot dead in Darndale on Wednesday had only become a father four months ago and was wheeling his child in a buggy when he was killed. He was gunned down outside Our Lady Immaculate Junior National School in Darndale.

He was also a close friend of Sean Little (22) who was shot dead near Walshetown in north Co Dublin late on Tuesday night, less than 24 hours previously.

He had only posted a tribute to his dead friend minutes before being shot dead himself.

“Rest in paradise, you were a gent,” he wrote in a message posted on Facebook along with a photograph of the two of them together. Both men knew their lives were in danger.

The man killed in Darndale was shot near Marigold Road at about 4pm on Wednesday.

Gardaí say the killing had all the hallmarks of a gangland attack and are exploring links to the drugs trade.

The scene of the shooting, in a laneway next to the school, has been sealed off and the Garda has deployed all the resources of a murder investigation to the inquiry.

Gardaí in Coolock Garda station are carrying out the investigation into the killing of the man, who was believed to be local.

In a statement on Wednesday evening, gardaí said they were appealing for witnesses to the fatal shooting.

“ A man in his 20s was shot a number of times and was later pronounced dead at the scene,” a garda spokesman said.

He said an incident room has been established at Coolock Garda station.

Mr Little, from Kilbarron Ave, Kilbarrack, north Dublin, was shot dead on a back road that leads from Walshestown in north Co Dublin to the M1.

Separately, gardaí are investigating a drive-by shooting that occurred outside a gym in Mulhuddart, west Dublin on Tuesday night. No one was injured in the attack at Church Road which happened at around 9.30pm.

In a statement, Minister for Justice Charlie Flanagan said he utterly condemned any violent loss of life.

“I am extremely concerned about the three shooting incidents that took place in Balbriggan, Mulhuddart and Darndale in the past 24 hours,” he said.

“An Garda Síochána are now conducting full enquiries into the circumstances surrounding these incidents and I would appeal to anyone who has information which could help to please come forward to them as soon as possible.”