One Eastern European man in mid-40s was arrested by gardaí 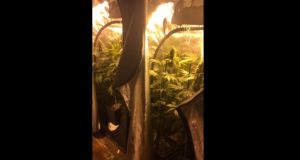 In a statement on Sunday, a Garda spokeswoman said the estimated street value of the seized cannabis was over €60,000. Photograph: Garda Press Office

Cannabis worth an estimated €60,000 was seized in a Garda raid of a growhouse in Newbridge, Co Kildare on Sunday.

Gardaí raided a property in Rossconnell, Newbridge, where a cannabis growhouse was discovered. One Eastern European man in his mid-40s was arrested at the scene, and is currently being detained in Newbridge Garda Station under Section 4 of the Criminal Justice Act, 1984.

In a statement on Sunday, a Garda spokeswoman said the estimated street value of the seized cannabis was over €60,000. Investigations in the case are ongoing, the spokeswoman said.

The exact value of the seized cannabis will be identified following further lab analysis.

In a separate unrelated operation, an estimated €20,000 worth of cannabis was also seized by gardaí in Portlaoise in a search of another growhouse.