Three men to appear in court over ATM thefts 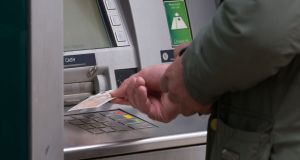 All three are due to appear before Belfast Magistrates’ Court on Monday. File photograph: Aaron Chown/PA

All three are due to appear before Belfast Magistrates’ Court on Monday.

A fourth man, aged 30, who was also arrested in connection with the incident in the Gilnahirk Road area has been released on bail pending further enquiries.