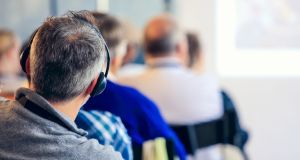 Word Perfect Translation Services has taken at least five sets of legal proceedings over recent years, most of them against the Department of Public Expenditure and Reform, but also against An Garda Síochána. Photograph: iStock

Accumulated profits jumped by €500,000 to €2.3 million at Word Perfect Translation Services, the Dublin company involved in expensive litigation with the State over tendering processes.

The company has a series of High Court proceedings in train against the Department of Public Expenditure and Reform in which it is challenging the outcomes of tendering processes involving the immigration service, An Garda Síochána and other public bodies.

The business is owned by Dublin-based Russian solicitor Olga Shajaku and her Albanian-born husband, Agim Gashi, by way of holding company Dardania Holdings.

The husband-and-wife directors were paid €322,366, with a further €24,000 being invested in their pension schemes. Neither company’s accounts show a pretax profit figure.

The Dardania accounts show it owed €1.76 million to group undertakings at year’s end, a figure that was up from the €1.19 million at the end of the previous year.

Paddy Teahon, the former secretary general of the Department of An Taoiseach, is listed as a director of Word Perfect, according to the company’s latest annual return. However, Mr Gashi said this was no longer the case.

“Paddy left about two years ago. That is a mistake,” he said.

Word Perfect has taken at least five sets of legal proceedings over recent years, most of them against the Department of Public Expenditure and Reform, but also against An Garda Síochána.

The cases have already led to rulings in the Court of Appeal and in the Supreme Court in procedural disputes over discovery and other matters.

In a judgment in the Court of Appeal in March, Mr Justice Garrett Simons noted the evidence of Mr Gashi that Word Perfect had tendered (unsuccessfully) at cost for a contract for the provision of services to An Garda Síochána because “the spinoff or collateral work generated by Word Perfect being the official translator for An Garda Síochána is very valuable. Reference was made in this regard to the work that is available from solicitors.”

The contract was won by Forbidden City Ltd, a company owned by Dublin businesswoman Crystal Li, and which trades under the name of Translation.ie.

The judge noted that Word Perfect said it was “aware that the hourly rate it pays its interpreters is lower than the rate paid by other market participants”. Notwithstanding this, the company argued in the case that it had been scored lower for cost than Forbidden City. Therefore, that company must have tendered at below cost.

In a ruling in January 2018, Mr Justice Séamus Noonan noted that there was an obvious issue between the Office of Public Procurement and Word Perfect over the latter’s performance.

“There is a major dispute between the parties as to the extent and seriousness of these problems,” the judge said.

Ms Shajaku is the founding partner of MS Solicitors, Dublin, and is involved in promoting business links between Ireland and Russia. She is scheduled to speak at the St Petersburg Private Wealth Forum in September, an annual event in the Russian city designed, according to its website, to provide a unique networking platform for international financial service providers to meet Russian private bankers, family offices and high net worth individuals.