The 22-year-old from Kilbarrack, north Dublin had no criminal convictions 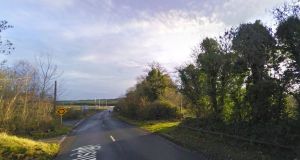 A man’s body was found lying near a burning car at about 11.20pm on Tuesday at Rowans Little, Walshtown, Co Dublin. File photograph: Google Street View

The man shot dead in a gangland attack in north Co Dublin late on Tuesday night has been named as Sean Little.

He was a 22-year-old with no criminal convictions from Kilbarron Ave, Kilbarrack, north Dublin. He was shot dead on a back road that leads from Walshestown in north Co Dublin to the M1.

While the victim, who is from Coolock in north Dublin, had not been convicted of any crimes, he had been very closely associated with known gangland criminals.

Last week in Donaghmede, north Dublin, an effort was made to shoot a man as part of the Drogheda gangland feud. The victim of Tuesday night’s shooting was close to the suspects of that botched attack.

He was also close to people centrally involved in the Kinahan-Hutch feud. He had a strong social relationship with a man in his 20s who is close to Liam Byrne (38), the Kinahan cartel’s key leader in Dublin for almost a decade.

Sources said the victim had been the subject of a number of stops and searches by gardaí and had been found to be wearing a bulletproof vest.

Gardaí are working on the theory he had driven to the spot where he was found to meet somebody he knew and trusted. They believe he was standing outside his car on the roadway when he was shot.

His killer or killers then set his Opel Insignia alight in a bid to destroy forensic evidence.

The scene was sealed off and remained secured by gardaí overnight. The body was left in situ pending the arrival of a pathologist.

The man’s remains were removed in an ambulance early on Wednesday morning to the Mater hospital for a postmortem.

The scene is undergoing a forensic examination by members of the Garda Technical Bureau.

Supt Tony Twomey, who is based in Balbriggan, said the Garda was alerted to the attack when a member of the public contacted Dublin Fire Brigade at about 11pm. When they arrived they found the dead man’s car ablaze and his remains in the road.

He added the victim had a wound to the head and chest, though he did not confirm those were gunshot wounds.

Other sources said the post mortem was expected to show they were gunshot wounds and that the man may have been beaten before being shot dead.

He added gardaí wanted to speak to anyone who may have seen the car or recorded it dashcam footage any time between 10pm and midnight.

And gardaí were also seeking any dashcam footage from motorists who were on the M1 around the time of the murder and immediately after it.

The location where the body and burning car were found is close to the top of the off ramp at exit five on the M1 on the road to Walshetown.

“We are in the early stages of the investigation and we can’t quite say what is behind this,” Supt Twomey told the media close to the crime scene.

Anybody who may have witnessed any suspicious activity around the scene or who may have information about the murder is asked to contact Balbriggan Garda station on 01- 802 0510, the Garda Confidential Line 1 800 666 111, or any Garda station.