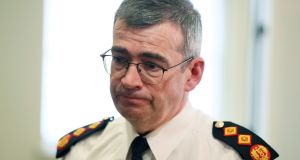 Garda Commissioner Drew Harris: Policing Authority finds a rise in public satisfaction towards the end of 2018 coincided with his appointment. Photograph: Brian Lawless/PA

Many members of the Garda still do not appreciate the pressing need for cultural change within the force and believe colleagues who have been pressing for reform are simply dissatisfied about austerity-related cutbacks, the Policing Authority has found.

In its Policing Assessment Review of the Garda for last year, the authority has also concluded some members of the Garda’s senior leadership team were not even familiar with the policing plans for their own areas for the year.

However, other senior leaders were highly engaged during 2018 with the policing plan for that year, seeing it as an opportunity to prioritise initiatives, thus increasing the chances of their implementation.

The authority noted a “culture audit” was published during the year, containing a number of important messages for the Garda.

“It has been the authority’s experience that the seriousness of these messages does not appear to be understood consistently within the organisation.

“The view is still being shared within cohorts of the Garda Síochána that the results are no worse than in any other large organisation, and that dissatisfaction is simply a byproduct of austerity. That view is not shared by the authority, as it is not borne out by the evidence from the audit and its analysis by PwC.”

The authority noted many positives for the Garda, such as high levels of satisfaction – about 90 per cent – being expressed in public attitude surveys.

“It was encouraging to note that respondents who agreed the Garda Síochána is ‘well-managed’ increased significantly in the latter half of the year,” the Policing Authority noted.

The authority was referring to the findings of the Garda’s public attitudes survey, now conducted quarterly. The increased satisfaction rate towards the end of last year – from 43 per cent to 54 per cent – coincided with the appointment of Garda Commissioner Drew Harris.

The authority also found the Garda had made significant improvements in more quickly analysing computers containing evidence of crimes, such as images of child sex abuse.

And while the lack of supervision of rank-and-file gardaí had been at the centre of many recent policing scandals, the supervisory ranks of the Garda had been bolstered last year.

Progress had also been made with improving the reliability of crime figures and other data, though further work was needed. More money-laundering investigations had also commenced and more firearms than anticipated were seized.

Of the 121 policing initiatives in last year’s policing plan, some 53 were deemed “on target” by the end of the year, 63 were off-target and five could not be rated.

The Garda’s annual policing plan is drawn up at the start of each year and is effectively a list of commitments the force makes to the community. These can include targets for recruiting staff into the organisation, improving the way crimes are counted and investigated, reaching more of the community via social media, and achieving certain cultural reforms.

The authority says the policing plan contained the Garda’s policing goals for the year and was effectively a charter for change.

However, one-third of the initiatives in last year’s plan were “off-target” by March, half were off-target by June and more than half off-target by December.

“It is the authority’s view,” it said, “that many of the issues this year were not just predictable but predicted, and that the Garda Síochána itself was aware from the start of the year that the policing plan was extremely unlikely to be fully delivered.”

The Garda was still proving very slow to recruit more civilians; some 500 extra recruitments were planned for last year but only 395 achieved. And when one factored in the shortfall from the previous year, the actual target for civilian recruitment for last year should have been 880 personnel, though fewer than half that number was hired.

Of those 395 civilians who were recruited, some 195 filled vacant civilian posts. Since January 2017, only 258 sworn Garda members had been redeployed to policing duties because a civilian had replaced them in the non-frontline job that they had been carrying out.

A review of domestic homicides was still far from complete and a policy for how to proceed with the review remained at the development stage, more than two years after it first emerged many domestic homicides had not been recorded properly.

The Garda had also targeted an increase in the number of sexual crimes being reported to it last year. However, while more victims did indeed come forward, the detection rate for these crimes was less than half what had been targeted.

A plan had been expected last November to ensure the implementation of the Crowe Horwath report into the inflating of breathing testing numbers. However, that plan was only delivered last month, more than 18 months after the report’s publication. The Policing Authority said the delay was a source of frustration.