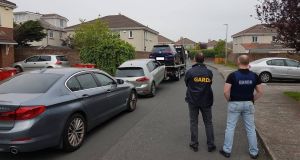 Six cars were seized when gardaí raided a number of houses in west Dublin under Operation Coatee. Photograph: Garda/ Facebook 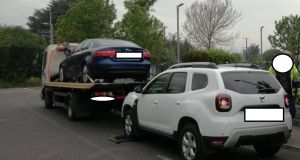 A series of Dublin home raids targeting suspected insurance fraud marks just the beginning of a new Garda effort to shut the practice down, the head of the Garda National Economic Crime Bureau (GNECB) has said.

Under the newly formed Operation Coatee, specialist units including armed gardaí raided a number of houses in west Dublin on Wednesday. They executed further warrants at four solicitors’ practices.

Six cars were seized (a Jaguar, a Mercedes, a BMW, a Dacia and two Volkswagen Golfs) as well as jewellery worth more than €300,000, substantial paperwork and documents.

Financial records were also taken as evidence from the law offices and will be used to help build a case against suspects in 20 incidents of alleged fraud.

Some of the claims under investigation have already been paid out and all involve slips and trips. In some cases it is believed fake identities were supplied to process multiple claims.

It is understood the solicitors targeted by gardaí are to be investigated for the extent to which they performed due diligence on the background of the claims and those taking them.

Wednesday’s operation was meant to be a signal of intent to those involved in insurance fraud and unofficially marked the start of Operation Coatee. Much of the work will depend on the ability of insurance companies suspecting foul play to identify specific cases and report them quickly to gardaí.

Following the raids, Det Chief Supt Pat Lordan of the GNECB said: “I would like to think it marks the start of co-operative efforts to tackle insurance fraud countrywide, not only road traffic offences but other incidents.”

Chief Supt Lordan said while road traffic and so-called “slips and trips” claims were most prominent, the unit could also be called in to investigate bogus claims in cases of trespass injuries on private property, business fraud, false claims of stolen property and even some rarer categories such as life insurance-related deaths.

“The big focus has always been on the road traffic accidents and most recently on the trips and falls. Some of these are very genuine claims but they can be exaggerated and it’s very hard to prove that they have been exaggerated,” said Chief Supt Lordan.

“The challenge will be for the insurance companies to identify the fraudulent claims quickly. The quicker we have it, the better the chance of getting evidence.”

He said that while road traffic scams had been significant, ongoing publicity in recent times had probably fed a recent reduction in cases brought to Garda attention.

As well as regular GNECB detectives and local officers, the new national crackdown on offences will involve multi-agency co-operation, headed by Garda Special Crime Operations (SCO) and including, where necessary, the Criminal Assets Bureau (Cab), the Garda National Drugs and Organised Crime Bureau and the Garda National Bureau of Criminal Investigations (GNBCI).