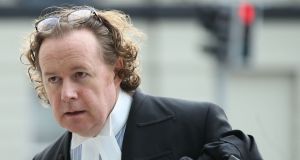 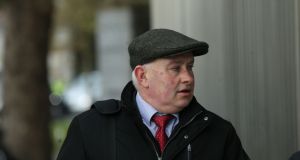 Patrick Quirke (50), of Breanshamore, arriving at the Central Criminal Court. He has pleaded not guilty to the murder of Bobby Ryan. Photograph: Collins Courts 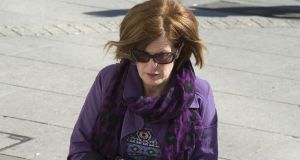 Bobby Ryan’s death was a “callous” and “calculated” and the only verdict available to the jury is to find Patrick Quirke guilty of murder, lawyers for the State have told the Central Criminal Court.

The defence said the prosecution’s evidence was thin and warned the jury of the dangers of accepting the evidence of Mr Ryan’s then girlfriend, Mary Lowry.

Mr Quirke (50), of Breanshamore, Co Tipperary, has pleaded not guilty to the murder of Mr Ryan, a part-time DJ known as ‘Mr Moonlight’.

He went missing on June 3rd, 2011 after leaving Ms Lowry’s home at about 6.30am. His body was found in an underground run-off tank on the farm owned by Ms Lowry and leased by the accused at Fawnagown, Co Tipperary, in April 2013. The prosecution has claimed that Mr Quirke murdered Mr Ryan so he could rekindle an affair with Ms Lowry (52).

Finishing his closing speech to the jury of six men and six women, Michael Bowman, prosecuting, said for a guilty verdict he must rule out any rational theory that would be consistent with Mr Quirke’s innocence.

Counsel said that in August 2012, following the tragic death of Mr Quirke’s son, the accused “berated” Ms Lowry for not supporting him and told her: “After all I’ve done for you.”

Mr Bowman asked was it bad luck that after being seen on CCTV at Ms Lowry’s house on December 3rd, 2012 somebody in the Quirke household went on the internet at 3.36pm looking for a “human body decomposition timeline”. He said Mr Quirke’s computer cache shows that a website relating to human decomposition was also visited in July 2012.

Gardaí pointed out that the cached website was visited prior to his son’s death and Mr Bowman asked: “Is all this just bad luck?”

Counsel asked if it was coincidence that as the clock was ticking down to Mr Quirke’s lease terminating at the Lowry farm, he decided to empty slurry from the slatted cow shed and decided to draw water from a tank he had not looked in since 2008.

The tank, Mr Bowman said, is like a “colander” and doesn’t hold water, yet Mr Quirke said he could see the water being sucked out before discovering the body. He said Mr Quirke was one of only four people who knew of the existence of that tank and he had had exclusive access to it since 2008.

Mr Bowman said the accused revealed in interviews that he knew the exact depth of the sludge in the bottom of the tank – 1ft – and the approximate depth of the tank at 5ft. This was something that could only be known, counsel said, by someone who had gotten into that tank.

“Bobby Ryan was murdered by somebody possessed of information and knowledge possessed only by Patrick Quirke. Patrick Quirke is guilty of the murder of Bobby Ryan on June 3rd, 2011. There is no other rational hypothesis consistent with innocence,” counsel said.

“The evidence has been laid painstakingly before you over the last 13 weeks. When you weave those strands together it is of sufficient strength to bear the burden and weight placed upon it.”

Defence counsel Bernard Condon SC told the jury that the prosecution evidence was thin and that Mr Bowman had sought to do their job for them. He warned them of the dangers of accepting beyond reasonable doubt the evidence of Ms Lowry. He said the prosecution is based on theory and circumstantial evidence and there is no hard evidence.

Circumstantial evidence, he said, is not a shortcut that allows you to adopt a theory unless you are satisfied beyond a reasonable doubt.

He asked them to apply their “greatest skill: scepticism”.

This trial is about peoples’ lives, he said, principally Mr Quirke’s. He said they must approach the trial coldly and dispassionately, like a scientist, and must start from the point that Mr Quirke is innocent.

Using the analogy of a train, he said the prosecution would have to push the train to “the station of guilt”. It would be an uphill journey with many branch lines and many stations before that final stop.

He said the evidence presented by the prosecution was “grasping”. There were hints, he said, of “give a dog a bad name and hope that will hooch you up the hill a bit”.

He said there were some things that “grabbed” him, such as former Deputy State pathologist Dr Khalid Jaber not being present when the body was removed from the tank. But, he said, the prosecution had adopted the approach of “so what, nothing to be seen here, don’t worry about that”.

He pointed out that photographs had been lost by gardaí, that a pathologist had described the pathology evidence as “sub optimal”, gardaí had made fresh statements during the trial and fingerprints found in Mr Ryan’s van were not tested until week 10 of the trial.

He said Mr Bowman had told the jury they could be clear on the time when Mr Ryan died but Mr Condon said “nothing could be further from the truth”.

Mr Condon said many of the allegations made by Ms Lowry, “wouldn’t last five minutes in a court where that allegation was being made on its own”.

He said there was nothing to support her claim that Mr Quirke was in her porch when she came home one afternoon or that he took her passport.

She also alleged he assaulted her but there is “nothing to support that, nothing”, he said.

He told the jury to look at each of these things and ask, “am I satisfied beyond a reasonable doubt”.

Turning again to Ms Lowry’s evidence he reminded the jury that she told them she wants to “solve this case”.

“That’s a very dangerous witness, engaged in a process they should not be engaged in,” Mr Condon said.

He said the jury should be careful of her evidence and suggested that she had, from the start, put a spin on her evidence by saying that her late husband was not great friends with Mr Quirke.

At the heart of much of what went on between her and Mr Quirke, he said, is a broken relationship.

“Attached to that can be bitterness and anger and unhappiness and they get mushed up together and people who loved each other deeply can find themselves in the family law courts roaring abuse at each other,” he said

He also pointed out that the case had received “enormous press coverage”, adding: “I don’t know why. I think there’s a prurience to it.”

Addressing Mr Quirke being seen on CCTV taking underwear from Ms Lowry’s line, he said none of us are “whiter than white” when we conduct ourselves in private.

“It doesn’t look great but what does it really establish?” he asked.

Mr Condon will continue his closing speech to the jury on Monday in front of Justice Eileen Creedon.