Yellow Road in Whitehall closed off while Gardaí and specialists investigate 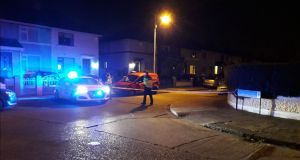 Emergency services at the scene of the discovery of a suspect package in Whitehall, north Dublin. Photograph: Paul McAuliffe

The army bomb disposal unit are investigating a “suspect package” discovered on a road in north Dublin on Sunday night.

Units were called to the scene at around 10pm on Sunday. The road has been closed off, and bomb specialists are preparing to inspect the package to identify its contents.

The package was left at a home on the street, and may have been placed there as a threat linked to a local dispute, sources say.

Local Fianna Fáil councillor Paul McAuliffe said several residents had been evacuated from their homes, while others on the street had been informed by authorities to stay away from the front windows.

If the package was left as a threat to the homeowner it would be “very worrying” Cllr McAuliffe said.

“At this hour it is quite late, and people are out of their houses, but the community spirit has kicked in and others are out bringing cups of tea and such,” he said.

One resident living on the road, who asked to not be named, said authorities advised her to stay indoors while the incident was dealt with. She said she saw the Army bomb disposal mobile robot moving up the road, and there was a loud bang shortly after 11pm, which she suspected may have been a controlled explosion.

“We hadn’t a clue what was going on,” she told The Irish Times, and described seeing several Garda and Defence Forces units pull onto the road in the small estate.

After the loud bang, several people tried to leave their homes and walk onto the street to see what was going on, she said, and were told by gardaí and Army personnel to remain indoors.

“We were told we couldn’t leave the house, some people were evacuated from their houses. We were kind of not sure should we be looking out the window,” she said.

She described the area as “very quiet”, and said the incident was “very surprising on a Sunday night”. There was rarely ever trouble in the area, and she said residents on the road were “very tight knit”. She was not aware of any local disputes.