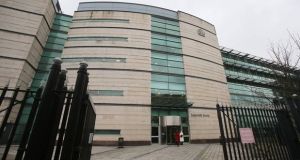 A man accused of using social media to name the woman at the centre of a rape trial involving two rugby stars stayed away from court as his case was raised before a judge for the first time.

Former Ireland and Ulster players Paddy Jackson (26) and Stuart Olding (25) were acquitted of raping the complainant after a trial in Belfast earlier this year.

Sean McFarland from Belfast is accused of naming the woman on social media during the course of the eight-week trial in the spring.

Complainants in rape and other sex crime cases are entitled to life-long anonymity.

McFarland, a 35-year-old from Rinnalea Gardens in the city, was not obliged to attend the first appearance hearing in Belfast Magistrates’ Court.

During a brief hearing on Tuesday before judge Amanda Henderson, his solicitor John Finucane said his client was “out of the jurisdiction”.

He asked for the next hearing to be listed for three weeks’ time.

After the jury unanimously found them not guilty, Jackson and Olding were sacked by club and country for involvement in explicit WhatsApp chats that were revealed during the marathon trial.

They are now playing in France.

Mr McFarland, who could face a maximum fine of £5,000 if found guilty, was one of two people investigated for alleged breaches of the anonymity law, but prosecutors in Northern Ireland decided not be pursue the other case due to “insufficient evidence”.

After the trial, two other men - Blane McIlroy and Rory Harrison, both 26 - were also unanimously acquitted of lesser charges connected to the alleged incident at Jackson’s house in June 2016.

McFarland’s case will be heard again on October 16th. - PA