Revenue seizes cigarettes and cash in Dublin, Cork and Clare 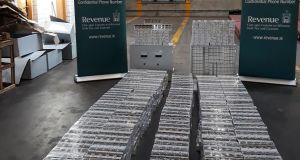 Revenue Officers at Dublin Port seized 216,000 cigarettes with a retail value of more than € 112,000. Photograph: Revenue

Cash and 216,000 cigarettes have been seized by Revenue Officers in Cork, Clare and Dublin this week.

A Polish man in his 50s was stopped and searched as part of routine profiling in Ringaskiddy Port on Wednesday.

The man was due to travel to Roscoff in France and € 3,750 in cash was found hidden in a holdall with the assistance of Revenue detector dog Marley.

Revenue Officers seized the cash suspecting it to be the proceeds of crime or intended for use in criminal activity.

Separately on Friday, Revenue Officers at Dublin Port seized 216,000 cigarettes with a retail value of more than € 112,000.

The Marlboro branded cigarettes were discovered when officers examined freight which had arrived from Singapore. Investigations are ongoing.

Also on Friday, at Ennis District Court, Revenue Officers were granted a three-month cash detention order after $15,000 in cash was seized by Revenue at Shannon Airport on Thursday.

As part of routine profiling, a British woman in her 30s, was stopped and searched after she arrived at the airport.

The cash was found in her luggage after she had travelled from São Paulo in Brazil.

The woman was questioned and investigations are ongoing.