Body of Irish teenager recovered from lake in Spain 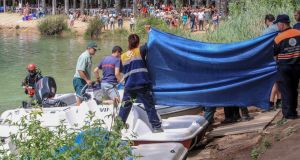 Spanish police have recovered the body of an Irish teenager from a lake in Lagunas de Ruidera, Spain.

On Saturday a search operation was launched after the young man was reported missing, according to reports from local media.

Regional television network Castilla-La Mancha Media reported the missing Irishman was 19-years-old and was living nearby in Spain on a language programme.

The Irish teenager went missing during a trip to a national park, between the provinces of Albacete and Ciudad Real, in central Spain.

Water units of the civil guard and local fire brigade units carried out a search of the national park over the course of the weekend.

A spokesman for the Albacete provincial fire service confirmed the body of an Irishman was recovered from a lake during the search on Sunday.

The fire service tweeted on Sunday that the search effort to locate the young man had concluded “with an undesirable ending for everyone”.

The body was recovered from the lake at approx 3:30pm.

A spokesman for the Department of Foreign Affairs said they “cannot comment on individual consular cases”.