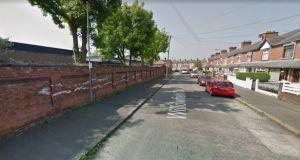 Police are looking for a group of masked youths seen near St Vincent’s school in the Willowfield Drive area. Photograph: Google Street.

An arson attack on a school in the east the city was a “sectarian hate crime”, according to police.

The PSNI said the attack on St Vincent’s school on Willowfield Drive was started when a downstairs window was smashed and accelerant poured in and set alight.

Inspector Thomas Fairfield said: “Members of the NIFRS and police attended the fire, which was reported to us around 9pm.

“No-one was injured in the incident, but there was extensive smoke and scorch damage to the walls and ceiling of the classroom and a lot of the pupils’ coursework was destroyed as a result.

“Thanks to the efforts of the Fire Service, the fire was extinguished and contained to the ground floor. We are currently treating the fire as arson and a sectarian hate crime.”

He said officers were interested in talking to members of “a group of around 15 masked youths who, we believe, were involved in a number of incidents of anti-social behaviour in the east of the city last night.”

He added that between around 8.30pm and 9.30pm, it was reported that a group was seen setting bins on fire and throwing stones and other items at passing motorists in the Woodstock Road/Link area and setting off fireworks in the Willowfield Walk area.