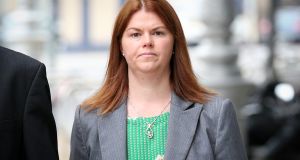 Sandra Higgins (37) arrives on Thursday at the Dublin Circuit Criminal Court where the DPP entered a nolle prosequi against her. Photograph: Collins Courts.

The decision by the Director of Public Prosecutions not to have a fifth trial of child minder Sandra Higgins bring to an end a six-year criminal justice process that will now have no resolution.

Ms Higgins entered that process with the presumption of innocence and leaves with the same status.

Since the date of the alleged harm caused to the baby in her care, on March 28th, 2012, a lengthy criminal investigation has run its course and the DPP authorised criminal charges to be laid against her.

However, when the case finally reached the courts, a multitude of problems arose, resulting in three aborted trial processes and a hung jury at the end of the one trial that ran its course.

The DPP does not explain its decisions, including why it does not retry particular cases.

Informed legal sources said in some cases it becomes clear during an initial trial that the evidence is not as strong as first believed. Because of that, if a jury fails to reach a verdict or a trial is discontinued for any reason, the DPP will decide against a retrial.

In other cases, like that of Sandra Collins; when repeated efforts at a trial do not succeed, other factors come in to play, the sources said.

“If the DPP goes again and again; at some point it begins to appear like perhaps there’s campaign against a defendant,” said one.

Even the perception that there may be a campaign against a defendant, and the damage that might do to the case and the wider justice system, is enough to discouraged a retrial, the source added.

Another legal source concurs: “It may seem it’s being rerun again and again until the ‘right’ outcome is achieved; as if it’s been decided from the outset the person is guilty.”

A “tipping point” was reached and a case would become “contaminated”.

“If someone is presented to the public, in court and in the media, as the accused often enough is there a chance that in itself influences a jury against the defendant? That’s what the DPP has to consider.”

There was nothing to stop the State proceeding with a fifth trial process in the case of Ms Higgins though the 37-year-old from Cavan could have mounted a legal challenge to stop it.

Ms Higgins (37) of The Beeches, Drumgola Wood, Cavan, had pleaded not guilty to intentionally or recklessly causing serious harm to a baby girl at the accused’s home on March 28th, 2012. The child survived.

In June, 2015, Ms Higgins first went on trial but the jury was discharged after failing to reach a verdict. A retrial followed in May, 2016, but it collapsed after it emerged a jury had been Googling the background of a witness in the case.

In January, 2018, another jury was sworn in for a third trial but an unspecified legal issue arose before the trial properly opened and so the jury was discharged.

And last month the fourth trial process collapsed with it emerged emails between expert witnesses in the case had not been disclosed to the defence.

The fact the expert witnesses were in contact was not the contentious issue. Instead, it was the non-disclosure of that contact to the defence side in the trial that caused problems.