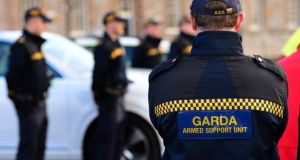 The gun fell out of the boot of a Garda SUV in Dublin. File photograph: Dara Mac Dónaill/The Irish Times

The Garda Ombudsman’s Office has begun an investigation into how an armed Garda unit lost a sub-machine gun and its ammunition in traffic in Dublin.

The Heckler & Koch MP7 sub-machine gun fell out of the boot of a Garda vehicle when it went over a speed bump on Tuesday.

It was handed into Store Street Garda station by a member of the public on Tuesday evening. It had not been fired and all its ammunition has been accounted for.

A spokeswoman for the Garda Síochána Ombudsman Commission (GSOC) said on Wednesday it had not been notified of the incident by the Garda and only learned about it through media reports.

“The commission is concerned about the reports in the media and the apparent lack of security that these reports suggest,” it said in a statement.

“The commission is of the view that an independent investigation is necessary to ensure public confidence in the civilian oversight of policing in a time of increased armed gardaí in Dublin city in particular.”

GSOC can investigate any matter if it appears a garda may have committed an offence or contravened regulations, even if no complaint is received.

Investigators are appealing for any witnesses to the incident to contact them on 1890 600 800, info@gsoc.ie or via direct message on Twitter.

The investigation will likely focus on whether the gun was securely stored in the vehicles.

Under Garda regulations, such weapons must be kept in secure lockers in the boot of the vehicle when not in use.

GSOC will also examine if the boot latch was faulty or unsecured at the time of the incident.

Senior gardaí are also conducting an internal investigation into how the weapon was lost. Minister for Justice Charlie Flanagan has said the incident is gravely concerning.

The armed unit was on patrol in an Armed Response Unit SUV as part of a Garda operation against organised crime in the city centre.

Sources say the boot of the vehicle opened as the car went over a ramp in the city centre at about 5pm. The weapon, which was in a bag, fell out into traffic where it was picked up by a member of the public. The bag also contained ammunition.

The weapon and ammunition were handed into Store Street station within the hour.

The MP7 is issued to members of the Emergency Response Unit, the Special Detective Unit and the Regional Support Units.

The guns have been widely deployed on Dublin streets in recent years in response to the ongoing Hutch-Kinahan gangland feud. The gun, which was loaded with a full magazine, is capable of firing nearly 1,000 rounds a minute.

The Garda Press Office gave out few details about the incident on Wednesday, saying only an investigation has begun into an “incident involving an armed Garda unit in Dublin city centre.”

“A senior Garda officer has been appointed to examine all the circumstances relating to an incident involving an armed unit in Dublin city centre,” a Garda statement said.

The unit was not part of the security detail for the visit of the Duke and Duchess of Sussex, gardaí say.

Mr Flanagan said he is awaiting an early report from gardaí on the incident.

Speaking on Today with Miriam O’Callaghan on RTÉ Radio on Wednesday, he said: “I was informed yesterday evening of an incident in Dublin, where it appears a machine gun fell out of the back of a car and was handed in by a very civic-minded citizen into the gardaí. So, luckily any danger was averted.

“The issue is currently the subject matter of an investigation by a chief superintendent. It is a matter of grave concern. I’m very concerned about the issue.

“I’m looking forward to an early report. But clearly something went wrong. Something happened here that shouldn’t have happened”.