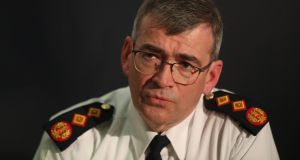 The news was so bad that Garda Commissioner Drew Harris felt compelled to apologise to the youth criminals, their victims and Irish society across the board. Photograph: Niall Carson/PA Wire

In the bowels of Dublin Castle as dusk set in yesterday, Garda Commissioner Drew Harris looked more than a little shell shocked.

Some 4¼ months into a five-year stint in the Republic’s top policing job, the honeymoon is most definitely over.

Harris had just spent a couple of hours being grilled by the Policing Authority about what can only be described as extreme failings in the youth justice system.

And now he was sat side by side with authority chair Josephine Feehily; both facing a press pack keen to slowly and painfully pick over the entrails.

For months information has leaked out about the problems an internal Garda review was finding with the force’s youth diversion programme.

But yesterday the whole truth and (we think) nothing but the truth emerged when Harris and his team appeared before the authority. Pretty it was not.

The news was so bad that Harris felt compelled to apologise to the youth criminals, their victims and Irish society across the board.

The debacle centres on the fact that 7,894 youth crimes were never prosecuted or progressed in any way.

Through Garda inaction, the cases simply stopped once the children involved were deemed unsuitable for the Garda’s youth diversion programme. Once rejected by the diversion programme, they should have been progressed through the criminal justice system proper. But they weren’t. Nothing happened.

However, despite falling between the cracks, all of the cases were counted as “detected”, or solved, by the Garda. That means the force must now amend the official crime data again.

Some 57 of the youth offenders whose cases were allowed lapse are now dead.

A small number of the crimes allowed to lapse included a rape, another unspecified sex crime, growing cannabis, firearms offences and aggravated burglary; where violence or the threat of violence is used.

Public order accounted for 21 per cent of the crimes that lapsed through inaction, 11 per cent were thefts from shops, 10 per cent criminal damage and seven per cent burglaries.

It is doubtful whether any of the crimes could now be prosecuted; most are statute barred and the others would be contaminated by the poor way they have been handled so far.

And now Josephine Feehily is concerned the same problem – of suspects for crimes escaping justice because the system forgets about them – is happening in the adult criminal justice system.

The first sign of problems with the Garda’s youth diversion programme came in 2014 when the Garda Inspectorate, which examines aspects of policing and recommends reform, raised concerns.

An internal Garda review, the results of which emerged yesterday, has progressed for some time. And last year a Garda monitoring report offered an update.

Now that the truth is out, that update was eviscerated by authority member and former RTÉ director general Bob Collins yesterday as meaningless and secretive.

He told Harris and his team the update was marked by “a degree of reticence. . . that borders on the self denial of a monastic vow of silence”.

And the youth justice debacle, he pointed out, was just the latest in the Garda in which initial information was acted on and investigated slowly and where systemic problems were uncovered.

There were echoes of “past behaviour” that he hoped would have been overcome by now; specifically citing the irregular financial governance at the Garda College, Templemore.

Despite a series of grave policing controversies coming before the authority in recent years, Collins believe this was the worst.

Cases were never progressed, young criminals were not helped, victims didn’t get justice and the Garda’s reputation had taken another pounding.

One of the other authority members, Noel Brett, praised Mr Harris for what he believed was a clear and swift apology. But he expressed his grave concern at the fact controversy after controversy was engulfing the Garda. And he was concerned at the rate of reform within the force.

The controversies so far included the termination of penalty points, the inflating of breath test data, the misclassification of homicides, the wrongful prosecution of some motorists, the policing of public order incidents, inaccuracies in crime data, financial irregularities at the Garda College in Templemore and issues with the prosecution of child sex abuse.

“We observe a pattern of issues in the organisation’s response to issues such as these,” Brett said.

“I would say they are typified up until now by a lack of urgency. And if we think the Garda Inspectorate highlighted this issue that we are talking about today back in 2014; five years later we’re addressing it.

“There is a significant issue about a lack of urgency in tackling issues. There’s a lack of organisational curiosity to understand what went wrong. And each issue seems to get treated, one after the other, as standalone incidents.”

However, Harris replied while the Garda had been hit with repeated problems, there were also repeated successes in fighting crime. He said he was determined to use the latest crisis as a catalyst for change.