How #MeToo is influencing rape trials in Ireland 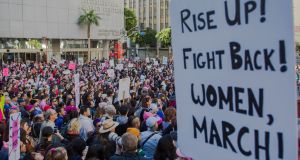 The Women’s March in Los Angeles on January 19th, 2019: the view is taking hold among defence lawyers that #MeToo is something which should be raised with a jury. Photograph: Jessica Pons/New York Times

The legal system in Ireland tends to operate on a different timescale to the rest of society. Cultural changes, particularly attitudes towards women, take significantly longer to filter through the walls of our courtrooms.

For example, women were automatically exempted from serving as jurors until 1976, nearly 50 years after winning the right to vote. And it was only in 1990 that it became illegal for a man to rape his wife.

So it is no surprise the #MeToo movement, which has been highlighting the often poor treatment of victims of sexual abuse worldwide, has been largely absent from the courtroom to date.

But in recent months that has started to change, according to seven Irish lawyers who spoke to The Irish Times.

Barristers in many rape and sexual assault trials now view the movement as an “elephant in the room” which they believe they must address to ensure a fair trial for their client. Some have also softened their approach to cross-examining alleged victims.

Many accused now express worry juries will be unfairly swayed by the movement and that they will be convicted on the basis of a social media campaign rather than the evidence against them.

In these early days it is impossible to say if #MeToo is having an influence on conviction rates for sex crimes. The anecdotal evidence suggests the effect, if any, is very modest.

There are figures showing a significant rise in the number of sexual offences being reported (10 per cent last year) but, without in-depth research, it is impossible to say if this is because more offences are being committed or because more women feel empowered to come forward because of the movement.

There’s only one other way to glimpse what is influencing a jury and that is by looking at the questions they are asking during trial.

“First of all we are definitely seeing juries ask more questions in recent years. And those questions appear to be more targeted. They show they’re paying attention to the wider debate happening in society,” said one senior counsel who prosecutes and defends rape cases.

In one recent trial in Dublin, a jury asked the judge for the definition of consent under the Criminal Law (Sexual Offences) Act. The act was introduced following a concerted campaign by women’s groups in recent years for consent to be specifically outlined in law.

Observers were shocked at the specificity of the question, particularly because neither the new law nor the definition of consent were factors in the trial.

In another recent trial, a juror wanted to know if they could take the accused’s “sexually aggressive” text messages into account when deliberating, texts messages which were mentioned only in passing by the prosecution.

“These are questions you simply wouldn’t have got even just five years ago. It shows at least some are engaged with the wider debate,” the barrister said.

But there is little to show this engagement is influencing jury verdicts. Most practitioners believe rape juries still judge cases solely on the evidence before them.

“I think the jury system is robust and I think Irish juries are fair and balanced. I would be very disappointed and surprised if I thought a jury was going to do a guy down just because of Harvey Weinstein or because of people marching in the streets,” another experienced defence counsel said.

Indeed it seems more possible that the opposite is true. Rather than society being too quick to take the side of complainants, a recent study indicated a large segment of Irish society continues to have alarmingly backward views on consent.

Nevertheless the view is taking hold among defence lawyers that #MeToo is something which should be raised with a jury.

“I’ve referred to it myself. I think it’s sensible to mention it – cases should be decided on their own facts but juries must be aware of the movement so it should be addressed,” Mary Rose Gearty SC says.

A major part of the #MeToo movement is that alleged victims of sexual abuse should be believed. Gearty believes it is important that juries know that “believing someone is not the same as proving guilt”.

In another recent trial, a man was accused of raping a colleague after a night out. In his closing speech the accused’s defence barrister told the jurors “they would have to be living under a rock to not have seen the groundswell of opinion that says alleged rape equals proven rape”. He told the jury such a view is a complete reversal of the presumption of innocence which is “a cornerstone of our justice system”. The accused was acquitted.

Another barrister said they deal with the issue head on: “I tell the jury they are perfectly entitled to hold whatever views they want outside of the four walls of this court and engage in any social media platforms that they choose or be part of any social media or public movement.

“But once they’re in a case they must decide that based exclusively on what they hear in within the four walls of the courtroom and they are not entitled to bring in any views they held beforehand.”

The wisdom of raising #MeToo in the courtroom has been a topic of debate in the Law Library for a while but it’s only recently that defence barristers have started doing so.

“You’ve got to be so careful when talking to juries. But practitioners are generally of the opinion that [#MeToo] is so prevalent a view that you have to actually address it,” a solicitor said. “It’s the elephant in the room. You want to address it early.”

The prosecution is far less likely to raise it to aid their case, she said. “That would be totally out of bounds. To try use an outside campaign to help secure a conviction; you’d get in trouble for that.

“But you might get a clever prosecutor using certain key words or phrases a bit more than they used to; perhaps asking the jurors if they ‘believe her’ a bit more to remind them of the ‘I Believe Her’ thing. It would be frowned on though.”

When Irish barristers do address #MeToo, it’s usually indirectly and briefly. And then, only to mitigate its possible influence on jurors. In America, defence attorneys are going a step further.

“The atmosphere of #MeToo has infected this case,” said a lawyer for a Ari Goldstein, a student accused of sexual assault in Philadelphia, before indicating he intends to select jurors who are hostile to the movement when the case comes to trial this year.

Last January, a man accused of sex trafficking in Chicago asked a judge to delay his case, arguing he couldn’t get a fair trial while #MeToo stories dominated the headlines.

And in April, lawyers for entertainer Bill Cosby asked potential jurors if they were familiar with #MeToo during jury selection for his trial for indecent assault.

Defence lawyers in Ireland may be taking a much softer approach towards #MeToo but that’s not because their defendants aren’t worried about it.

A man accused of sex trafficking in Chicago asked a judge to delay his case, arguing he couldn’t get a fair trial while #MeToo stories dominated

“In those circumstances the client is very skittish but all you can do is assuage his fears and say ‘Look the judge will warn the jury appropriately.’”

Another #MeToo-related change, according to several practitioners, is that defence barristers are taking softer approaches when cross-examining witnesses, especially when it comes to the issue of consent.

“You have to do the best job for your client but not at the expense of bringing your name into disrepute,” one said.

The online vilification of some of the barristers who defended the accused in the Belfast trial in which two rugby players were acquitted has perhaps played a role in this change, as has the rape trial in Cork where defence barrister Elizabeth O’Connell SC was accused of showing the complainant’s thong to the jury and suggesting it indicated consent (the later revelation that she never actually showed the underwear to the jury did little to quiet the public anger).

“When you’re closing, something can come out of your mouth without you even thinking so you certainly check yourself a bit more.”

Barrister Dean Kelly believes the characterisation of defence lawyers as insensitive brutes is unfair and that the treatment of complainants been slowly improving long before the #MeToo movement came along.

“It is not acceptable to produce items of underwear in court or to seek to gratuitously humiliate a trembling complainant in the witness box. Society has moved a thousand miles past these kinds of things and so has the conduct of trials,” Kelly said.

“Equating what you wear with consent, that may have chimed with the views of wider society in the 1950s and so undoubtedly it informed the way in which lawyers approached cases. But that thankfully is not the case today.

“It is important to remember that the outcome of a criminal trial is determined by 12 regular citizens sitting as a jury. Crudely equating consent with what a complainant is wearing or how much they had to drink is obnoxious certainly, but it is also likely to be profoundly counterproductive in terms of defending one’s client.

“Those are rightly unacceptable ideas in modern society and despite easy caricatures to the contrary, that is where both lawyers and jurors live.”