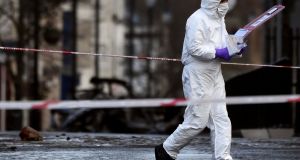 A forensic officer inspects the scene of the car bombing in Derry. Photograph: Clodagh Kilcoyne/Reuters 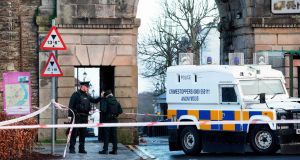 Poice Officers and police forensic officers work at the scene in the aftermath of a suspected car bomb explosion in Derry. Photograph: Paul Faith/AFP/Getty Images 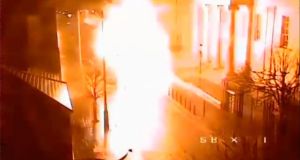 Police in Derry believe the dissident republican group the New IRA was behind an explosion outside the city’s courthouse on Saturday night.

“Our primary line of inquiry is that the New IRA was responsible,” Assistant Chief Constable Mark Hamilton told reporters in Derry on Sunday.

He said it was a “significant attempt to kill”.

Nobody was injured when the device exploded on Bishop Street shortly after 8pm. It was in a pizza delivery vehicle which had been hijacked earlier.

Mr Hamilton said a bomb – which was described as a “crude and unstable device” – was then placed inside and the vehicle was then driven half a mile through the city, placing lives at risk.

Two men, aged 34 and 42, were arrested this evening in Derry in relation to the investigation. This follows the arrest of another two men in their 20s earlier as part of the inquiry, and they remain in custody.

A group of 150 people had to be evacuated from a youth club directly opposite the bomb site, as well as hotel guests and those in local bars.

The Police Service of Northern Ireland (PSNI) has condemned the device as “unbelievably reckless”, and said it would have killed anybody who had been near it when it exploded.

Taoiseach Leo Varadkar said: “This was an appalling, reckless amd cynical act of terror. Violence to achieve political objectives has been rejected by the people of this island again and again. The Government condemns it in the strongest possible terms.”

Bishop Street remains cordoned off. Army technical officers are at the scene, as are police forensic invesigators. It is expected to remain closed until at least late on Monday.

The type of device used is unclear, and police say the extent of the damage to the vehicle means it will not be known until the forensic examination is complete.

Mr Hamilton said that the pizza delivery driver had been called to an address in Quarry Street in the Brandywell area of Derry where he was approached by two armed and masked men.

“He was taken to the back garden of a house and held there while possibly a third male was also involved in removing the car from the scene.

“At some point then a bomb was put into the car and then that car was moved by, we believed by a single person, up to Bishop Street.” The car was abandoned outside the courthouse and the driver ran off in the direction of the Bogside.

Mr Hamilton said that the car was abandoned at about 7.23pm, and that shortly afterwards a call was received by The Samaritans in the West Midlands warning of a car bomb outside the courthouse in Derry.

That call was passed on to West Midlands police, who then passed it on to the PSNI. A patrol had already spotted the vehicle and had begun to evacuate the area. The bomb exploded at 8.09pm.

PSNI officers cut gates at the back of a youth club to allow 150 people who were there to take part in a charity quiz to allow them to escape from the building onto the city’s walls.

“They got everybody away just in time,” said Mr Hamilton.

“At the time the place was packed with people, there was a hotel we had to evacuated and local bars, so there was a huge impact on the local community and a huge risk to people just going about their business and enjoying themselves,” he said.

Police release CCTV footage of driver running away from car outside courthouse on Bishops Street in Derry/Londonderry last night. pic.twitter.com/0nXw7qzDt9

“The lives that were in danger started in the community where this bomb was stuck in this car. Anybody that builds a bomb in the community sticks it in a car and then drives it half a mile through the city is placing lots of people’s lives in danger, very clearly.

“Secondly, anybody who was near this device when it was abandoned was at risk, as were our local community police officers who behaved heroically - along with those in the community - to clear the area, they were at risk.

“The people who planted this bomb failed to hurt anyone and for that we are grateful but of course lives were at risk.”

Mr Hamilton said that like all dissident republican groupings, their level of support and activity fluctuated, but that this was “obviously a more significant attack than in recent times”.

“All dissident groups in Northern Ireland are small groups, and it’s important for everyone to remember that they have very little community support either in this city or beyond.”

He said that he was confident that the police were “constantly disrupting” dissident republican activity, and that people in Derry were clear in their opposition to such attacks.

“Most people in the city don’t want anything to do with it, so on days like today, whilst we’re all a bit downhearted that it has happened, we should take encouragement from the support that the local community and I don’t think we should overestimate the ability of these people.

“At a time like this, and we’re seeing it in the city at the moment, there is a call for unity, and I’m confident we’re all standing together.”

Much of Bishop Street remains cordoned off.

No-one has yet claimed responsibility for the attack.

Saoradh – which describes itself as a revolutionary Irish Republican Party – said dissident republicans were behind the explosion.

Saoradh said in a statement that the explosion was “believed to have been a large mine attack by Republican revolutionaries”.

It linked the attack to the 100th anniversary of the Soloheadbeg ambush, which marked the beginning of the War of Independence.

Secretary of State for Northern Ireland Karen Bradley said “This attempt to disrupt progress in Northern Ireland has rightly been met with utter condemnation from all parts of the community.

“The small number of people responsible have absolutely nothing to offer Northern Ireland’s future and will not prevail.

“Our voices across the political spectrum are united. This is intolerable violence and we want to look forward and build a peaceful future for all in Northern Ireland.

“Thank you to the PSNI and emergency services who are working so hard to keep people safe and secure.”

DUP leader Arlene Foster tweeted: “This pointless act of terror must be condemned in the strongest terms. Only hurts the people of the City. Perpetrated by people with no regard for life. Grateful to our emergency services for their swift actions which helped ensure there have been no fatalities or injuries.”

Mayor of Derry John Boyle said: “Words fail you. It is regrettable that we are standing here once more in front of a police cordon after an explosion in the city centre. Tonight I’m very unhappy because I know the people of this city want to move forward and to build a better future and I am deeply saddened that a minority in our community wants to drag us back to the past. And what is worse, threaten life.”

Staff in the nearby Bishop’s Gate Hotel were told to lock doors and not allow anyone in. One woman who was inside said: “I was sitting eating my dinner when the bomb went off. After that the staff were brilliant and we were kept up to date with developments.”

All the residents in the hotel were n moved to nearby accommodation. There is no obvious damage to the hotel.

An elderly people’s home was within the security cordon but was not evacuated either.

The MP for the area, Sinn Féin’s Elisha McCallion, condemned the attack and said she believed nobody had been injured.

“This incident has shocked the local community,” she said. “In particular, there are many elderly residents who live in the area who have been alarmed by this incident. Thankfully no one appears to have been injured.

“Derry is a city moving forward and no one wants this type of incident. It is not representative of the city. I would encourage anyone with information about this incident to bring it to the police.”

SDLP Foyle MLA Mark H Durkan said: “Whoever is responsible for this explosion within our city centre hasn’t got the message that the people of Derry don’t want this on our streets. Whatever their agenda is they are causing distress, damage and potential death and that is not the way to further your cause”

DUP MLA Gary Middleton tweeted, “PSNI have confirmed there were no injuries in the serious incident at Bishops Street. Vehicle hijacked with explosion outside courthouse. Disgraceful act of terrorism.”

The Reverend Ken Good, the Bishop of Derry and Raphoe, said “the time has long since passed when such violence should have been consigned to history.”

The attack, he said, “was an act of utter recklessness which showed a callous disregard for the lives and safety of local citizens and visitors alike.

“It defies belief that anyone would place a bomb on a city-centre street, early on a Saturday evening, so close to people’s homes, churches, an hotel, sheltered accommodation, nearby pubs and a large car park. St Columb’s Cathedral and St Augustine’s Church - where a group of young people had been meeting yesterday evening - have both had to cancel their Sunday morning services while the Police carry out a follow-up security operation.

“I am extremely thankful that no one was injured - or worse - as a result of last night’s explosion.

“The attack was wrong. It is indefensible. It should never be repeated.

Fiachra McGuiness, son of the late former deputy first minister Martin McGuinness, tweeted: “Whoever is responsible for this bomb in our Beautiful City tonight, live in Planet hate”.

Independent unionist MLA and former minister for justice Claire Sugden said Derry and Northern Ireland “have suffered much and long left this behaviour behind. Hopefully no one is hurt.” –Additional reporting PA