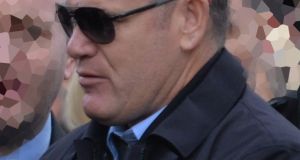 Thomas Kavanagh was charged after NCA officers, supported by colleagues from An Garda Síochána and Staffordshire police, searched his home address on Saturday. Photograph: The Irish Times

An Irish man charged with having an illegal stun gun disguised as a torch has been granted bail by a judge, following his arrest at Birmingham airport.

Thomas Kavanagh was detained after landing on Saturday, as part of a National Crime Agency (NCA) investigation.

The married father-of-six had just returned from a family holiday in Mexico with his wife and children.

He was later charged and appeared before magistrates on Monday, before a crown court bail hearing on Tuesday.

Kavanagh was charged after NCA officers, supported by colleagues from An Garda Síochána and Staffordshire police, searched his home address on Saturday, recovering a combination torch and stun gun.

The pink-coloured stun-gun was discovered on top of a kitchen cupboard, the previous hearing was told.

Kavanagh, who runs a car dealership and has lived in the UK for more than 15 years, was interviewed and charged with possession of a prohibited item under Section 5 of the Firearms Act.

Kavanagh, of Sutton Road, Mile Oak, Tamworth, Staffordshire, was not required to appear in court for the hearing, which was held behind closed doors.

His case was adjourned to be heard back at the same court on February 12th, according to court officials.

A 20-year-old man arrested alongside Kavanagh at Birmingham airport has been released under investigation, the NCA said.

A third man, aged 19, was also arrested and later released under investigation. – PA