Isis fighter: Alexandr Ruzmatovich Bekmirzaev, who was captured in Syria with Irish passport 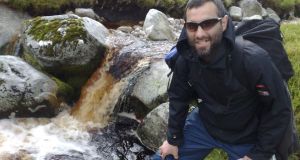 Alexandr Bekmirzaev hiking in Wicklow in 2010: captured by Kurds in December while fighting for Isis in Syria.

“There is no way out from here. They don’t let out man. Woman and kids can go. They don’t care and don’t help now. Some people eat, mainly [the] rulers, but most of the muhajers [foreigners who came to Syria to support Islamic State] are starving. Alhamdu Lilah [Praise be to God].”

The message was sent from close to the Syrian-Iraqi border, over the encrypted service WhatsApp, before 6am Irish time on December 16th. It came from Alexandr Bekmirzaev, the native of Belarus who became a naturalised Irish citizen in 2010, and left Ireland in 2013 to support Islamic State (Isis).

The recipient was a former Isis sympathiser who lives in Ireland and does not want to be identified for personal security reasons. Smit, not his real name, is from continental Europe and was already a Muslim convert, with radical views, when he came to Ireland in the mid-2000s. He still lives in Ireland.

In late October he was contacted by Bekmirzaev over WhatsApp and the two men remained in contact up until December 27th, just three days before Bekmirzaev was captured by the Kurdish-led Syrian Democratic Forces (SDF). Smit’s WhatsApp correspondence with Bekmirzaev has been seen by The Irish Times.

At the time of the correspondence Bekmirzaev is believed to have been in or around al-Shafah, a town in one of the few remaining parts of Isis-controlled territory in war-wracked Syria.

The SDF, which is supported by the US, the UK, France and others; Iraqi forces just across the border; forces loyal to the Syrian leader Bashar al-Assad who is receiving support from Russia and Iran; and militant supporters of other radical Islamic groups; all surround the remaining Isis-held pockets along the Middle Euphrates Valley.

Smit had not heard from Bekmirzaev since 2013. But early on the morning of October 26th, he received a WhatsApp message from Bikmirzaev, who also used an adopted Arabic name, Abdul Ahad.

“Everybody thinks you’re dead,” Smit replied. During the correspondence that ensued, Smit encouraged his friend to try to escape, while not revealing that he, Smit, no longer believes in Islam.

Bekmirzaev was in a desperate situation. Food was becoming scarce, the local leaders – Bekmirzaev sometimes called them the “government” – were looking out for themselves, and foreigners were only able to leave if they had money. Many of the fighters had family with them, and there were rumours they were being raped when they fell into enemy hands.

As the enemy troops closed in, the Isis positions were being attacked by US B-1 bombers.

“Dead thing is not faraway here. Everyday someone goes. Alhamdu Lilah [Praise be to God]. Someone remember me,” Bekmirzaev said on October 30th.

On December 3rd, he said: “We hope that Allah change [the] situation but more likly we will all die here.”

One morning Bekmirzaev woke to find that the shop where he bought laban, or buttermilk, had been bombed overnight. The children of the family that ran it were now yatim [orphaned].

Smit urged his friend either to try to get to Turkey, which was up to 300km away through the desert, or to give himself up to the SDF, who might eventually allow him travel back to Ireland.

“I don’t know what’s your situation on the ground or even where are you, but surely better go to Europeans or even Americans then to Shias [Iranians] or Russians. The former will hassle you but keep you alive. The latter not.”

“Akhi [my brother] I can’t go. I am afraid [of] Allah, to lose his mercy. And many people ends in prison,” Bekmirzaev responded.

Smit said Bekmirzaev would not be betraying Allah by seeking to escape. “I believe you were all misled. Even myself.” The Isis “dream” was dead and Bekmirzaev should not throw his life away on a failed project.

“I believe it’s an extermination camp for people who took religion seriously. Good hearted people like you.”

“So much injustice towards migrants [foreign Isis supporters],” Bekmirzaev said. “Now situation is like a jungle. Everyone survives like he can. But still there is many good brothers from migrants and locals.”

“I believe it’s an extermination camp for people who took religion seriously. Good hearted people like you”

Bekmirzaev was still a believer. “But if u know what some people do here u even more don’t believe. This road is very heavy.” He did not, he said, want to become a murtad or apostate.

There were smugglers who said they could get people to Turkey for between $3,500 to $5,000 per adult, with children going free. Every day people were leaving. Mostly local Isis supporters, “but some visitors too”.

“Without [money] there is no way to [Turkey]. Here is no one will help u without money.”

The city of Idlib, in northwestern Syria, was under the control of another militant Islamic group, the al-Nusra Front, and there was a rumour that foreign women and injured Isis supporters could go there under a deal negotiated by “the government”.

But Idlib was far away, through Kurdish and Syrian-held territory, and there were rumours of betrayal, with women being raped, and men ending up in camps.

When Bekmirzaev mentioned rape, Smit responded: “Rape was used as a weapon of war by your group as well. No wonder.”

“Akhi, I dont know much about [it],” said Bekmirzaev. “I almost don’t communicate to anyone here for five years. I live, pray, go through difficulties, and that [is] all I do. Before I had car. I worked with medicals. I stopped [that] more than three year. You know I have this disease. It troubles my life a lot. Really a lot. I tried to cure it but no success yet.”

Bekmirzaev said his disease was a mental one. He was hearing a lot of “was was”, or whispering, in his head. “I have jinn [demons].”

On December 3rd, Bekmirzaev said: “A guy I knew went with [a smuggler]. They drop him just few km from here in desert and now he jail with Kurds. For $5,000. Subhan Allah [Glory to God]. Akhi, u can trust here no one.”

Food prices were rising. Meat cost $40 a kilo, and dates $18. One day a kindly local gave Bekmirzaev some flour and kerosine, so he was able to have bread and warm water. It was cold and he slept in the mosque at night. His faith in the local Isis leaders was turning to suspicion.

“Here they don’t give you nothing,” he said on December 16th. “I realise who these people are too late but better late than never. Akhi, just want you to know what these people is. I think soon they go back home and betray us as they did in Mosul and all the other places where we lost.”

By December 20th, Bekmirzaev was torn between trying to get someone to take him to Turkey, even though it appears he did not have the necessary money, and trying to give himself up to the Kurds even though he might end up spending a long time in a detention camp.

On December 22nd, he said there were new rumours that the “government” had warned local smugglers not to help foreigners escape. There were mines that had to be negotiated by those who wanted to flee towards Turkey.

There was “100 per cent no chance to get to [Turkey]. 250-300 kms away through the unknowing desert with no food and hypocrit Arabs who sell you to the Kurds for nothing.”

On Christmas Day, he sent Smit an audio message over WhatsApp, in the background of which fighting can be heard. The situation had changed dramatically, he said. “I have to move out from this place.”

But there were mines everywhere. “If they see who is leaving they could shoot on the spot. Not the other side. This side.” The internet access he was using to sent the WhatsApp messages was likely to soon get bombed, he said.

On December 26th, he wrote that the fighting was “2 to 3 km away. That’s how close the Kaffir [non-Muslims] are right now.”

There was “no stuff, no food” and the local government had “put mines everywhere that we can’t get out”. Only the locals knew the way out and they were charging $8,000 per person. “Criminals.”

“If they see who is leaving they could shoot on the spot. Not the other side. This side"

Just before 11am on the 27th, Smit gave his friend some advice “in case you are captured”. He never received any response.

The SDF is believed to have captured Bekmirzaev in al-Shafah on December 30th. On January 6th, they issued a press statement saying Bekmirzaev and four others, two from the US and two from Pakistan, had been captured during fighting that was “liberating the last regions under the occupation of Isis”.

Bekmirzaev and the four others were “a group of terrorists who had been preparing to attack the civilians who were trying to get out of the war zone”.

The SDF has not responded to requests from The Irish Times for an update on Bekmirzaev’s current status. A spokeswoman for the Department of Foreign Affairs said the Irish consular services were investigating reports that an Irish citizen was being held in Syria.

Bekmirzaev has a non-Irish wife, who is believed to be from eastern Europe, and an Irish-born child. They left Ireland after Bekmirzaev’s departure in 2013 and their current whereabouts are not known.

In the WhatsApp exchanges, Bekmirzaev said a town called Hajin was close to the village he was staying in.

On December 19th, the UK-based Syrian Observatory for Human Rights (SOHR), said Isis had killed more than 700 prisoners it was holding after the fall of Hajin to the SDF, with some of those killed being Isis deserters. Isis still had up to 400 prisoners in the desert areas it controls, SOHR said.

The thousands of people who have gone missing in Syria and Iraq include approximately 3,000 women and girls from the Yezidi community, whom Isis members used as sex slaves, it added.

According to Leith Fadel, editor of the online Al-Masdar News, al-Shafah is now under the control of the SDF. The Kurdish-led force is now fighting its way into al-Sousah, the last Isis stronghold in the eastern Euphrates region.

As for the captured foreigners, “many countries do not want to take back these Isis fighters, so they basically sit in limbo in Syria”, he told The Irish Times this week.

“They are not exactly staying in a four-star hotel, though I haven’t heard of any ill-treatment of prisoners. They are also monitored by the US coalition,” Fadel said.

Smit said he contacted The Irish Times because the Bekmirzaev he knew “wasn’t a monster bent on killing anybody”.

He was “a victim of radical, or true Islamic brainwashing. In real life, he was a helpful, quiet and generous person. He also suffered from a mental condition, which made him more vulnerable to becoming radicalised.”