Aviation as a hobby: ‘I fly planes – that’s kind of cool’

Every time I take off I think, ‘Wow, I can’t believe I’m actually allowed to do this’ 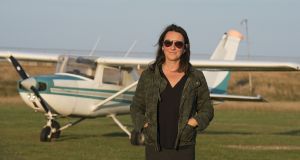 The concept of a humans flying through the air from point A to point B seemed impossible 120 years ago. The Wright Brothers’ invention revolutionised travel and trade alike. It is easier than ever to fly all over the world, to visit family, for work, to explore faraway places. But there are also those who fly simply to fly; for a love of the thrill of aviation.

Flying schools are seeing increasing numbers of Irish people taking up flying as a pastime and achieving their pilot’s licence, with some making it part of, or their entire, career.

Hannah Quinn is a film and television director from Bray in Co Wicklow, who is currently editing a new Netflix series in London. Several years ago, she worked on a film involving planes and helicopters, which encouraged her to learn how to fly herself. She began her lessons soon after.

I went in and they thought I was looking for a voucher, but I said, ‘No, I want you to teach me how to fly!’

“Once you start, you want to keep flying, even though it costs a fortune. It’s a muscle memory skill, you need to keep it up so that you don’t forget,” she says. “It’s the most amazing feeling. You can’t believe that you’re flying this piece of tin around. And the perspective is extraordinary; you’re looking down and recognising things down below, like “that’s a river”, simple things that look different from up there.”

Quinn learned how to fly at the flight school in Newcastle, Co Wicklow. She continues to use the airfield there now she has her private licence.

“I went in and they thought I was looking for a voucher, but I said, ‘No, I want you to teach me how to fly!’”

She is one of few women that fly at the school there. “They don’t get many women wanting to learn. They have about 100 students, and only three are women. And that’s the average, only about three per cent of pilots in the world are women. In Ireland and England it’s a bit better, at six per cent, but it’s not that much better, is it?”

She hopes more women will get involved in aviation. “Even if it’s just a confidence thing – ‘I fly planes’ – that’s kind of cool.”

Learning to fly, or getting a private pilot’s licence, is by no means cheap. Hour-long lessons cost around €180, and you must complete a minimum of 45 hours of lessons before you can sit your exams. There are then nine written theory exams, and one practical test.

The licence awarded in Ireland is recognised around the world. It is approved by the European Aviation Safety Agency (EASA), which allows pilots to bring family and friends to accompany them on flights for pleasure in any EASA member states.

While there are several kinds of private aircraft you can fly with the private licence, most people begin with small Cessna planes.

“You just start flying as many different types of planes as you can so that you get different experience on different kinds of panels and cockpits and aerodynamics. The more varied the planes you can fly, the better you become as a pilot; you’re prepared for anything.”

Jonah Craig, a recent graduate from Sligo, had his first flying lesson when he was just 15. The lesson was a birthday present from his father. “I remember I had to sit on a little cushion on that pilot seat, to see,” he says.

“You can’t log hours on your licence before you’re 16, so it was more of a novelty thing, but from then I just loved it.”

The licence to fly a microlight requires just 25 hours of lessons, making it more attractive than the Private Pilot Licence

Since he turned 16, Craig has done one or two lessons a year. It has been an expensive hobby for a student paying rent in Dublin, but he hopes to get his licence within 10 years.

He studied computer science and business at university, but he would like to continue flying as a hobby, and doesn’t rule out the possibility of a career in aviation. “At the moment, I’d just like to fly for my own enjoyment, but who knows?”

Craig takes his lessons in Sligo Airport, which is now the main base in the northwest for search and rescue helicopters, having ceased commercial flight activity in 2011. “The air club run there all week. Through the price of your lesson you’re paying for the plane rental, the instructor to come up with you, the fuel, wear and tear and insurance. You can pay an annual membership to the club and get cheaper lessons, or you can pay per lesson.”

“It’s something I’d always encourage others to try, people hear about it and think it’s so alien, but it’s really not,” he says. “Fundamentally, there’s a lot of the same things as driving a car.”

Geoff Hill, a Belfast-based columnist and author, flies microlights, which are fixed-wing, lightweight, one- and two-seat aircrafts.

He was always interested in flying, but his eyesight was not strong enough for him to fly commercially, or in the Royal Air Force. Fifteen years ago, he started a “flying fund”, saving money for flying lessons. He began flying a Cessna light aircraft, before moving on to flying microlights.

Since then, Hill’s passion for microlights has extended into his professional life, and he now edits Microlight Flying, the monthly magazine for the British Microlight Aircraft Association. The Irish equivalent is the National Microlight Association of Ireland.

The licence to fly a microlight requires just 25 hours of lessons, making it more attractive than the Private Pilot Licence.

“Once the instructor thinks you’re capable of flying without killing yourself, they’ll send you up solo, where you take off, fly around in a circle and then come back and land again,” Hill explains.

“Every pilot who does a solo trip for the first time looks at the seat beside him and says ‘I want my mummy and I want to go home’.”

Microlights are also cheaper to fly than larger planes like Cessnas, or helicopters. Lessons cost about £90 per hour in Belfast, Hill says, making the cost of the licence around £3,000. This compares to about £4,500 to £6,000 for the Private Pilot Licence, or £11,000 for a helicopter licence.

“There are lots of little grass airfields down the country,” Hill says. “I’ve been doing this for over 15 years now, and it’s still great to just head down to a wee grass strip down the country, sit eating biscuits, drinking tea and talking nonsense for an hour, and then getting into your little plane and flying home again. It’s just a brilliant feeling.”

The regulations surrounding flying microlights differ slightly to those for flying larger small aircraft, but not by much. Microlights can only be flown in visual conditions, that is, in sight of the ground, and you can’t fly in cloud or at night.

“You can fly pretty much wherever you want. There’s a 10-mile circle around any large airport, so if you want to fly through that you have to ask permission, otherwise you don’t need to talk to anybody, although it’s usually polite to just give them a shout and let them know what you’re up to. Apart from that, you can fly wherever you want, without restrictions.”

David Courtney is a commercial airline pilot, originally from Tullamore in Co Offaly. Mainly based out of Shannon Airport, he flies short-haul across Europe.

“Every day there are variations in the day and in the flights we do. It’s interesting, it’s challenging, it’s rewarding,” he says.

Courtney began his flying career in the Air Corps, then in Air Sea and Rescue, before moving on to fly commercially. “I never planned to leave Rescue, I was going to stay for the long haul. But when you get married and you become a father, you change. I did 10 years of night rescue and I always knew that no matter how good we were or I was, Mother Nature and a power greater than mine would determine our success or failure, or life or death.”

The novelty has still not worn off. “I try to always remember the thrill of flying when I was starting . . . of lining up on the runway, apprehensive, excited and determined. I try to remind myself each time I fly that I have the best seat in the house!”

The difference between his current job and the work he did with Air Sea and Rescue is vast. “Now when I look down at the ocean on starry nights from 40,000 feet, I find it hard to believe I was once down there trying to hover over a Spanish Fishing vessel, to winch up someone whose life was in danger, or to take a crew off if it was sinking,” he says.

Despite it being his career, flying has never grown wearisome for Courtney, and he considers himself lucky to be able to do it. “It was always both a career and a pleasure, and it still is,” he says.

“Flying is such a modern phenomenon when you consider mankind’s span of time on earth. I see planet Earth and nature as so few have before me. Sunrises and thunderstorms, Irish bays and lighthouses and Mediterranean islands. Shooting stars at night, sunsets that can’t be photographed or shared. Every time I take off I think, ‘Wow, I can’t believe I’m actually allowed to do this’.”

What will €330,000 buy in Croatia, France, Hawaii, Scotland and Clare
Real news has value SUBSCRIBE