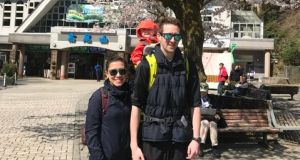 Christine, Lily and Denis Cadogan at Mount Takao in Japan.

Denis Cadogan is a private school teacher in Tokyo, Japan. He moved there in 2016 after spending time in China, Australia and New Zealand, and lives there with his wife Christine and one-year-old daughter Lily.

Where is the first place you bring people to visit?

A good place to start would be the Skytree Tower in Sumida. At a 634m, it’s certainly the highest point. It’s a good way of realising the scale and enormity of Tokyo as you look down and marvel at the sheer size of the city. It is always busy, but as you’d expect in Japan, there is great customer service to help you along the way. It has one of the fastest elevators in the world, to boot.

The top three things to do which don’t cost money are . . .

Walk around the Imperial Palace and park garden near Tokyo station, where you can get a view of the emperor’s quarters. A popular jogging spot!

Go to Shinjuku Gyoen park. There are also a lot of city parks to choose from, but this one is more central, and is great in any season of the year. Japan enjoys the full extremity of seasonal change, so from cherry blossom (Sakura) season through to summer barbecues, it’s always worth a visit to admire the scenery here.

There could be many shortlisted also-rans in this department, however, I still enjoy the controlled chaos of the Shibuya street crossing. Hundreds of locals and tourists converge at the busiest street intersection in the world. It will have a lot of new admirers for the forthcoming Rugby World Cup too, I’m sure, but somehow it all manages to work well.

What’s a great meal to get a flavour of Tokyo?

There is, naturally, a lot of great Japanese food such as ramen, okonomiyaki, udon . . . the list can go on. Though the number one for visitors has to be an authentic, Japanese sushi experience. To that end, the Standing sushi restaurant chain is unmissable. Fresh, natural and really tasty, it’s hard to think of where you could eat any better. There is a great menu and it is always popular, but one of those restaurants that is always worth queuing for. The branches are in Shibuya, Shinjuku and throughout most of the city, basically.

Where to go to get a sense of Japan’s history?

Japan’s history is, of course, complex and fascinating, and far from straightforward, even in its previous eras and with its previous emperors. A popular melding of old and new can be seen at the Asakusa Temple near Oshiage, which is both traditional and tourist friendly. The shrine invites visitors to worship along with locals, which is always good to see and is befitting of a country which practises discipline and serenity. It gives one a sense of how life here can be, and what makes Japan different from literally everywhere else.

Make sure you have room in your suitcase for:

If it were possible, onigiris. These are rice balls with assorted flavours. They are delicious and there’s nothing to compare them to – although they only last until the next day. Great souvenirs include an assortment of traditional goods from the markets, including the famous Tsukiji fish auction, or Omeshu (Japanese plum wine, great for a gift!). There is something for everyone here.

If you’d like to share your little black book of places to visit where you live overseas, please email your answers to the five questions above to abroad@irishtimes.com, including a brief description of what you do there and a photograph of yourself. We would love to hear from you