Where immigration controls are incredibly strict and the tax laws favour the wealthy, it’s tempting to see it as a microcosm of post-Brexit Britain 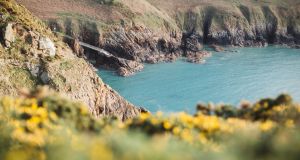 Jersey is like a continental holiday for people who prefer to hear English spoken around them.

Some people select their holiday destinations to find the outlandish and exotic. Others prefer the comfort of the familiar. Just a short flight from Dublin, Jersey offers both. On top of that it also serves up extraordinarily tasty food in abundance.

I hadn’t been sure what to expect from Jersey. Just 22km from France, and famous – or perhaps infamous? – as a tax haven, Jersey is an intriguing conundrum of an island.

It’s not quite part of the United Kingdom, though God Save the Queen is the official national anthem. In fact, it was part of the Duchy of Normandy, so when the Normans invaded England in 1066, the two got lumped in together. Looked at that way, Jersey actually owns the UK, as some of the islanders like to joke. Technically, it is a crown dependency, and the British cultural influence is everywhere.

Undoubtedly beautiful, save for some parts of St Helier where the new International Financial Centre is rather a blot, Jersey is not part of the EU. So, while delighting in being able to pick up some duty free without having to go long haul, it’s tempting to see the island as a microcosm of what post-Brexit Britain might look like – something French president Emmanuel Macron picked up on, back in 2016, when he was finance minister, warning British voters that the “UK is not about becoming Jersey . . .”

We all know what happened next, but I suspect for many Britons, the idea of being Jersey-like is rather attractive. The immigration controls are incredibly strict, the tax laws favour the wealthy, the sun shines, and lobster and ice cream are island specialities. So too are the potatoes. Jersey Royals are in a class of their own, nutty and sweet, and after one bite, I’m addicted.

Jersey is also a good spot for people-watching. Like parts of southern Spain, the island has a reputation for “shady people in sunny places”, and we start to invent back stories for the people enjoying the evening sunshine on the hotel’s charming terrace. There are a number of couples who look as if they’re enjoying a well-earned retirement, and some families with children – of the exquisitely behaved variety. We’re distracted by a fascinating couple in the corner, drinking very expensive wine. She’s beautiful, wearing an extravagant hat. It turns out they’re living in hotels while they decide where to put down roots.

I can’t blame them for picking Longueville Manor. Set on 18 acres just outside Jersey’s capital city, St Helier, the five-star hotel is cosy and romantic.

On our first night on the small island (just 8km long and 14.5km wide), we shouldn’t have been surprised at the array of seafood on the menu in the hotel restaurant: lobster, crab or scallops? How about the tuna? After all, it is surrounded by rich fishing grounds, and the coast of northern France is in sight. We decide to have them all, and so, instead of a main course, a succession of starters appear, each one more delicious than the last. And if we weren’t feeling enveloped in lovely luxury already, some very nice wines arrive to seal the deal.

The restaurant has dark, carved wood panelling, plundered from Spanish galleons, wrecked on Jersey’s shores. Outside are lovely woodland walks, and a swimming pool so I can burn some of the spuds off, prior to an excellent massage from Clair at the spa. I’m feeling so chilled that I take a wrong turn on the walk into St Helier, and we end up leaving the picturesque seafront to amble around the edge of a water treatment plant.

This makes us later than anticipated, so we don’t have a chance to get to the museum, where Bergerac’s car takes pride of place in a special exhibition. Millennials might not appreciate the lure of Bergerac, a BBC series, in which John Nettles (perhaps training for his role as Barnaby in Midsomer Murders) solved crime on the sunny island. Back in the 1980s it was unmissable TV.

King and Queen Streets have been recommended to us as major shopping attractions, but they’re host to the usual British high-street chains. Meanwhile, pubs with names such as The Prince of Wales, The Cock & Bottle and The Dog and Sausage have attracted afternoon al fresco drinkers who seem most at home with pints of lager and thoughts of merrie England. But head away from the obvious spots – just as you would with any destination – and find hidden gems, including winding streets, picturesque squares, and the lovely Central Market, where you can shop for lavender-infused oils, and Jersey black butter – a rich mixture of apples and spices.

Wanting to explore more, we head on to the pretty town of Gorey for a walk and early supper. Gorey is overlooked by Mont Orgueil Castle, a vast castellated edifice, that adds drama to the charming bay. We explore the local shops, where you can buy Jersey pearls and ceramic jugs with pictures of cows on them (the Jersey cow being the source of that delicious ice cream), and have a glass of wine before wandering up to Sumas for dinner (sumasrestaurant.com).

Here there’s lovely local lobster, scallops and crab, and more of those delicious potatoes too, as we sit on the terrace soaking up the amazing views. As we eat we learn of how, back in the 1600s, Sir George Carteret sheltered Charles II on the island, proclaiming him king after his own father, Charles I, had been executed. Following the Restoration, a grateful Charles gave Carteret a large chunk of land in the Americas, and so New Jersey was born.

The next day it’s impossible to tear ourselves away from the hotel, where our room has French windows onto a little terrace, which gives on to a croquet lawn, and then the lovely pool. Staying put in this tranquil oasis means we forgo exploring the western side of the island, a surfer’s paradise apparently. And we miss out on more castles, the drama of the rocky north coast, the Jersey lavender farm, and the La Mare vineyards.

Jersey is a great spot for a weekend break, but give yourself longer and hire a car to explore more, including sea kayaking, the Botanic Gardens, the museum – with Bergerac’s car, of course. It’s a short hop to Sark, the neighbouring island where there are no cars at all. Jersey is like a continental holiday for people who prefer to hear English spoken around them, and like the comfort of the familiar. Add a hotel as lovely as Longueville Manor, and the comfort is very alluring indeed.

Gemma Tipton was a guest of Aer Lingus and Longueville Manor. Aer Lingus flies direct from Dublin to Jersey from April 1st until October 6th, with six return flights a week during peak summer schedule. Prices from €49.99 one way, aerlingus.ie. B&B at the five-star Longueville Manor costs from £195 (approx €221) based on two sharing. longuevillemanor.com