Want to reduce your carbon footprint? Start by getting a reusable coffee cup

One Change: We bin 22,000 single-use coffee cups every hour in Ireland 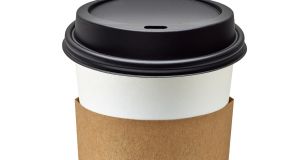 We bin an estimated 22,000 single-use coffee cups every hour in Ireland. Once seen as the ultimate lifestyle accessory – back in the late 1990s – these ubiquitous containers have now become a symbol of our throwaway culture. And they’re turning up everywhere, clogging up bins all over the place, the lids washing up on beaches and riverbanks, and even starring (mistakenly) in the final series of Game of Thrones.

Despite what you may think, they’re not recyclable, according to Government body My Waste. This is because most cups, even if they do contain paper, are lined with plastic to make them leak-proof and heat resistant. The lid, meanwhile, is usually made from single-use plastic and rarely recycled. In the UK, for example, just one in every 400 coffee cups is recycled.

But what about compostable coffee cups? While these may seem like a move in the right direction, it’s a tricky one. Firstly, many do not end up in the correct compostable bins. Instead, they go into general bins and on to landfill, which do not create the right condition for breaking down and composting. If they are put into recycling bins, on the other hand, often they end up contaminating other dry goods.

An even bigger issue is the resources used to create these compostable alternatives. These “natural” materials also need to be cultivated, harvested, processed, transported – all of which uses plenty of energy and water along the way. According to environmental author George Monbiot, compostable cups are not the solution. Replacing one single-use packaging with another – even if it’s compostable – does not tackle the problem of “mass disposability”, he believes. What needs to change is the volume of consumption and our attitude towards it.

“Behavioural change takes time,” says Sorcha Kavanagh, co-ordinator of the Conscious Cup campaign. Started in 2016, this initiative encourages cafes around Ireland to offer discounts to customers with reusable cups. There are now about 1,700 participating coffee shops across Ireland (you’ll find a map on consciouscup.ie) and many have reported an increase in the use of refillable cups, though it’s hard to get exact figures, Kavanagh says.

There is still a long way to go – just by looking around, on my train to work, at petrol stations up and down the country and during any rush-hour, most people drinking coffees are using disposable cups. A Government levy on single-use containers may be the fastest route to change, however.

“A levy is far more productive in changing people’s behaviour,” Kavanagh says, explaining how the expected “latte levy” a few years ago fell through. “Like the whole climate change issue, it requires everybody to work at it – the customer, the cafe and the Government.”

Bringing your own cup is one small and simple step, says Kavanagh. And it will help reduce your carbon footprint. If you drink on average one take-away coffee on weekdays, for example, you’ll save roughly 80-120kg of CO2 a year if you switch to a reusable cup. That is the equivalent of driving a (tax band A) car for 650-1,000km. (That’s not considering the carbon footprint of the coffee and milk inside the cup – which is a whole other issue.)

Once your reusable cup has been used more than 15 times, it is more sustainable than a disposable cup. And you won’t be adding to the pile of 500 billion disposable coffee cups that end up in landfill globally every year.