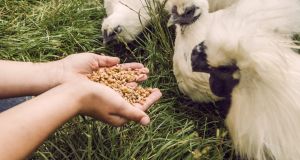 Award-winning children’s author, Michael Morpurgo says that children have got to feel that nature belongs to them if they are to love and protect it.

Award-winning children’s author, Michael Morpurgo says that children have got to feel that nature belongs to them if they are to love and protect it. For this to happen, they need to be out and about in the countryside.

“Many country people feel like they have been abandoned and forgotten because people in cities don’t think about country people, and the more we can do to break down these divisions, the better,” says Morpurgo who with his wife, Clare set up the charity Farms for City Children more than 40 years ago.

The couple came to the Borris Festival of Writing and Ideas in Co Carlow on a sunny June day to talk about their charity and the mutual benefits it brings.

The charity has organised visits for more than 100,000 children on the three farms since it started in 1976

The idea for the charity came from Clare Morpurgo’s childhood experience of summer holidays in the Devon countryside. She thought children from disadvantaged backgrounds in London, Birmingham and Manchester would love to have similar experiences and set about making that happen.

“We found people in the countryside who wanted to share their lives, and we made connections with schools deliberately targeted the children who need it most,” she explains. The charity has organised visits for more than 100,000 children on the three farms since it started in 1976.

“It gives children the feeling of being cared for, fed three proper meals each day and occupied from morning to dusk with interesting, serious, sensible work to do all day long,” she says.

So, about 35 children – aged between 9 and 11 – come with their teacher from a Friday to a Friday, and they do jobs like cleaning out stables and cow sheds, bringing cows out to a field, checking fences and gates, feeding chickens and pigs and clearing stones from fields. In the evening, Michael Morpurgo and other writers read them stories.

Some of the children struggle to adjust to their surroundings at the start of the week – and many of them will never have been in absolute darkness before. “Children aren’t always receptive in the beginning and they have to get used to being cold and being out in the dark, but if the teacher prepares them well, they will be fine,” says Michael Morpurgo. They don’t have access to phones or television while on the farm, so this is another adjustment they have to make.

“They pick up things very quickly and are often less frightened than their teachers. I remember bringing them to feed pigs – which are very noisy when being fed – and the children thought it was great fun but the teacher waited outside,” says Michael.

The Morpurgos are convinced that there are many benefits to this full immersion approach to farming. “The farmers talk to the children like intelligent sensitive human beings and fellow workers so the children get a great sense of confidence from it,” says Michael.

He says that the Farms for City Children changed the couple’s lives, and interacting with the children also provided inspiration for him as a writer. Morpurgo is the author of many children’s books including War Horse, Listen to the Moon, Farm Boy and Shadow.

Clare adds that when they get home, the children often want to help more. “They don’t fuss as much and they have more self-worth and communicate better,” she says. The project needs to raise over £1 million every year to enable 3,200 children and 400 teachers spend a subsidised week on one of the three farms.

A farmer from Co Laois who attended the Morpurgo’s talk at Borris spoke about the mutual benefit gained when children from a primary school in Roscrea, Co Offaly came to visit his family’s dairy farm. “They did projects in school before they came, and I was struck by how informed they were about the environment. It is a huge benefit to farmers too and could be developed more here,” says Jim Dwyer.

“You can explain things about nature more easily when you’re on a farm, and animals can have a very beneficial effect on children with stresses in their families"

The Dwyer dairy farm has 300 cows, a river running along one side of the farmland, wildlife areas, planted trees and ponds. “You can explain things about nature more easily when you’re on a farm, and animals can have a very beneficial effect on children with stresses in their families. The school was so pleased so we’ll do it again,” he adds.

While there isn’t a charity in Ireland offering city children the chance to work on a farm for a week, an initiative called Social Farming Ireland organises day visits for people with mental-health problems or intellectual disabilities. Early school leavers also visit family farms through the organisation. Farms vary from one-acre horticulture-only farms to suckler and dairy herds, equestrian, tillage, sheep, goat and mixed farms.

Helen Doherty, the national co-ordinator of Social Farming Ireland, says that while the organisation – and some participating farmers – would like to work with children, there aren’t the resources for it at present.

“If Social Farming Ireland was more established and better funded, something like that could evolve but we haven’t had anyone under aged 14 yet because of farm insurance,” she explains.

The approach taken in Social Farming Ireland is that two or three people come to the farm one day a week over a number of weeks and work side-by-side with the farmer. “We did have 15 students from a Leaving Certificate Applied programme attend three at a time over six months to one farm but that was an exception,” says Doherty.

“I’d like to develop a schools programme for farmers but this year, we have a series of farm walks to look at habitats and species, livestock or crops and look at how the farmer manages the land in support of nature. Some of these walks are open to families,” explains Barry.