A pilgrim’s walk in Wicklow 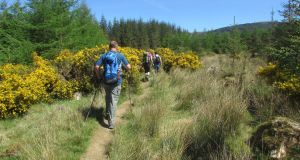 Valleymount, Co Wicklow, was a place I had never been to, but was aware of, since its appellation always struck me as an oxymoron. Then I discovered it was a trailhead for St Kevin’s Way and would require investigation for my book, Pilgrim Paths in Ireland.

The startpoint for Kevin’s Way was St Joseph’s Church. Built during the Catholic resurgence of the 19th century, it is adorned with a – fabulously pointless – Latin American façade. As I headed out of the village, this had me wondering how such ostentation was funded amid the austerity of pre-Famine Ireland. Soon after, I came upon an old sweat house that whispered of forgotten history. In times past these were extravagantly heated to cure joint pain and would, I mused, have been ideal for weary pilgrims after demanding journeys.

Uphill now on a minor road with steep declivities tumbling over sheep-strewn pastures to the liquid expanse of Poulaphuca Reservoir. Gaining a high point, the route descended in a parabola, reminiscent for me of the Spanish Camino. Here, expansive prospects opened up over the serene Wicklow hills with the head of Lugnaquilla peeping beyond.

Next, the trail entered a forest. Trees make our world three-dimensional and as if to order, the sun emerged to dapple the songbird-rich canopy above. An unpoetic firebreak and a firmer trail through mixed forestry then deposited me beside Ballinagee Bridge, where I encountered a couple of cheery pilgrim walkers coming from Hollywood.

Over lunch, they informed me they were completing the five passported paths of the new Irish Pilgrim Journey. After a farewell to the couple, it was onwards past the skeletal remains of an abandoned farmstead that has me wondering when did this place last ring to children’s laughter.

The well-marked trail now played hide-and-seek with the main road as it ascended towards the magnificent viewing point of the Wicklow Gap by diving abruptly in and out of unremarkable stands of commercial timber. Here, the going was pleasant enough as the path periodically transformed into a boardwalk before conceding to tarmac on the final, wearisome pull to the Gap. Sooner or later, every self-respecting pilgrim path should offer a “wow” moment and St Kevin does it here: the place is alive with walkers, cyclists, and day-trippers all imbibing the sublime vista.

Beyond, it’s open mountainside on a downhill ramble that definitely follows the footsteps of saints, for the flagstones of the old path are plainly visible. One final road excursion is mercifully short and then comes the spectacular descent into Glendasan, while soothed by the musical accompaniment of hurrying water.

The remains of a once-thriving lead mine recalled a time of prosperity not widely shared. Lead extraction eventually fell victim to the notorious boom-bust cycle of mining, but during the potato Famine, mining in Wicklow undoubtedly helped keep hunger at bay.

Following the right bank of the Glendasan river the path morphs into a compellingly enclosed sylvan trail before entering the hauntingly secluded valley where Kevin spent his life in contemplation. Eschewing the crowds of selfie-seekers swarming the monastery, I head instead for the Upper Lake to absorb its tranquil beauty. Gazing over the still waters it occurs to me that this landscape possesses near perfect harmony between land and water, as if laid out by some omnipotent celestial architect.