Walk for the Weekend: A gentle ramble in the Slieve Blooms 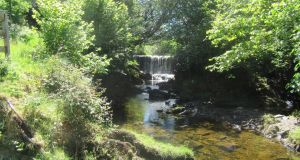 Rejoining the Slieve Bloom Way, I encounter a stream known locally as Purcell’s Brook and a beguiling little weir.

An economist is once reputed to have remarked, “I know this works in practice, but my worry is, will it work in theory?”

He might have been referring to rambling the Slieve Blooms where the absence of majestic summits and the often unsympathetic terrain along with the difficulty of uncovering circular walks has moved conventional theory to decry these uplands. Indeed, there were occasions after traversing egregious terrain and knee-high heather that I resolved never to return. These days, however, the Blooms have overcome any theoretical disadvantage in a most practical way: looped walks have been created with sympathetic underfoot conditions allowing ramblers to enjoy generous gain for minimum strain.

Early summer is the happening time in the countryside and it’s a tranquil May morning as I sally forth with a light heart from the Offaly village of Cadamstown. Serenaded by birdsong, I follow blue arrows uphill along an old coach road before entering a rustic track known locally as Paul’s Lane. Onwards now beneath a luxuriant bevy of creamy-white May blossoms until my curiosity is captured by the lachrymose remnants of the homes that once formed the village of Bordingstown, one of several abandoned villages around the Blooms.

Next is a parting with the Slieve Bloom Way at a point where great views expand towards an upland plateau bearing the unforgettable name of Wolftrap Mountain. Just the faintest whisper of a breeze tickles the sleepy landscape and so Wordsworth’s “two fold shout” of the now rare cuckoo echoes a clear and evocative reminder of childhood days when it resonated hauntingly across all of rural Ireland. Right and downhill now on an old laneway with the Blooms blooming all around, I pass through a gateway and continue across an old path that once conveyed people upland to worship in Cadamstown. At a rejoining with the Slieve Bloom Way, I encounter a stream known locally as Purcell’s Brook and soon after, a beguiling little weir.

Beyond, a stile leads to a spectacular path tagging the banks of the Silver river. Unchained by rising temperatures from the great glaciers that once banked against the northern side of the Blooms, meltwaters thundered down here carving a spectacularly deep gorge in the sandstone and underlying silurian rock.

Coming to a point where a sign declared “Steep Rock Face Keep Out” I am, not for the first time, confronted by the idiosyncratic nature of the Irish personality as a path has, of course, been worn away to investigate the forbidden. The hurrying waters now descend over pretty little waterfalls and eddies which I view from a wooden bridge spanning the river and marvel at how past floods managed to convey such almighty boulders downstream,

Abandoning the river, the path ascends to a wooden stile accessing farmland. Turning left onto a bucolic laneway, I amble downhill and through a concrete stile to regain the trailhead. Here, I conclude that, if theory follows practice, then revisionism is required for the landscape of the Blooms. Well managed, the area has clear potential, to become Ireland’s premier playground for ramblers seeking gentler outings with abundant opportunities to just stand and stare.

Suitability: Relatively easy outing on laneways, riverbanks and forest tracks. Care required on the path above the Silver river

Getting there: Paul’s Lane Loop begins in Cadamstown, on the R421/R422 between Clonaslee, Co Laois and Kinnity, Co Offaly.