Follow in the footsteps of Jane Austen and dip into Bath 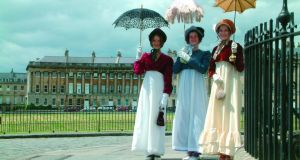 Steam is rising off the water, and golden evening light reflects on to the Bath stone of the ancient abbey. A gathering of modern-day Jane Austen characters is squealing with delight. We are floating high above the city in waters that have been drawn from deep within the earth for thousands of years.

Bath is all about the water. The clue is, of course, in the name. Without the hot mineral springs it would never have become the fashionable Georgian resort of the 18th century, the setting for two of Austen’s novels and a character in its own right in several others.

This summer the English city celebrates the bicentenary of the author’s death, on July 18th, 1817. Although Austen enjoyed her early visits to Bath she was not at all happy when her father moved the family there, and she often satirised its social scene of balls, promenades and assemblies.

At the Jane Austen Centre centre a guide in a mob cap and gown, with an encyclopaedic knowledge of her novels and letters, will fill you in on the author’s life and debunk much of the cliched nostalgiafest peddled by the tourist industry.

If you think Austen is all petticoats and marriage proposals it’s surprisingly refreshing to rediscover just how much of a feminist she was by the standards of the times.

They arrived in Bath. Catherine was all eager delight! Her eyes were here there and everywhere, as they approached its fine and striking environs – Northanger Abbey

Austen lived for a time a few doors down from the centre, on Gay Street, but had to move to less elegant lodgings as her family’s financial circumstances declined, a theme that found its way into her second Bath novel, Persuasion.

From Gay Street she often took the Gravel Walk up to the symmetrical Georgian delight that is Royal Crescent. If, as you wander the honey-stone crescents and squares, you sometimes feel as if you’re on a film set, that’s because you are.

Several Austen adaptations have been filmed in the city; Bath has no need of a stand-in when it serves perfectly well as an 18th-century backdrop to itself.

Continue your walk around the Circus and take in the sweep of the Paragon, the traditional entrance to the city, where Austen stayed on her first visit. Just around the corner, at the Assembly Rooms, is the Fashion Museum, which has a permanent collection and temporary exhibitions, and is currently showing the history of lace.

I saw the prettiest hat that you can imagine in a shop on Milsom Street just now. Very like yours – Isabella Thorpe to Catherine in Northanger Abbey

Bath has always been a centre for shopping and fashion, and Milsom Street is still the main thoroughfare. Bath is crammed with independent stores, galleries and arcades, interior-design emporiums, and antiques and vintage shops.

Today’s Bicentenary Costumed Summer Ball may be sold out, but you can pick up a Regency empire gown or a pair of breeches for the Masked Ball, or rent a bonnet for the Costumed Charity Promenade, both part of the Jane Austen Festival in September.

Other events include literary walks and talks (with a particular focus on Northanger Abbey, published in 1817), screenings, concerts, theatre and food tours.

They set off in good time for the Pump Rooms. Mr Allen, after drinking his glass of water, joined some gentlemen, and the ladies walked around noticing every new face and almost every new bonnet – Northanger Abbey

Pop into the Pump Room, the social centre of the city in Austen’s day and still a good spot for people watching. Nibble cucumber sandwiches with tea or Pimm’s or go for the rather more substantial Jane Austen afternoon tea, featuring pressed Bath chap – or pig cheek – and ham-hock terrine, scones with Earl Grey butter and plum jam, and desserts of the period, such as custard tarts and rhubarb syllabub.

The surroundings are all very genteel, with the Pump Room Trio playing classic airs and waiters topping up teapots, all surveyed by 18th-century portraits and lit by glittering chandeliers. Your fellow guests are likely to be a blend of well-behaved hens, retired colonels, mother-and-daughter birthday outings and tourists in shorts.

In Austen’s day bathers could enter the Roman Baths from a passage beneath the Pump Rooms, but bathing is no longer allowed. Hang back as the inevitable tours go through and, in a few moments of silence amid the steam, it’s easy to imagine the Romans lolling and lounging in the fourth century.

You almost expect someone in a Roman toga to come around the corner. And they do. It takes a moment to realise it’s just an artful projection between the columns, but the Roman channels under your feet that carry the water are real enough, and you can still stand before a Roman drain encrusted with minerals, where surplus sulphurous water pours constantly into the River Avon.

The waters rise at the rate of over a million litres a day, at a temperature of 46 degrees. Roman engineers built a reservoir around the Sacred Spring, and the baths at Aqua Sulis were part of an important religious centre dedicated to the Roman goddess Minerva. But the waters were known to the Celts too for their healing qualities.

He drinks at the Hetling Pump. We are inclined to hope he will derive some advantage from it in the end – Letter from Jane Austen to her sister Cassandra

You can’t leave Bath without taking to the water. While “taking the waters” isn’t always a pleasant experience (although, according to the Pump Room waiter, drinking it will “cure all that ails you”), slipping into the hot water is no hardship for anyone.

Non-Austen fans and even non-spa fans will relish the experience at Thermae Bath Spa, as the mineral-rich warm water works its magic on weary bones and even wearier souls. As the sun sets, guests on a twilight package head for the main rooftop pool to daydream, drift and dissolve.

The spa is a triumph of modern architecture and careful restoration. Its Cross Bath, where Austen’s father and brother bathed, is an open-air oasis encased in a listed stone building, and can be hired privately for groups of up to 12. And although Austen could hardly have countenanced unisex changing rooms and mixed bathing, as an author with an ear for dialogue she would have had a field day.

The city of the Bath bun and the bath chair, of nostalgia and gentility, has reinvented itself many times and is now carving out a newer, more creative space. The Bath Festival, in May, is a highlight of the British arts calendar, and Bath Spa University is a lively hub of children’s literature, digital storytelling and performance poetry.

But the city also has an alleyway called Quiet Street and a bus stop at Comfortable Place. This is still a place of rest and rejuvenation, of wallowing and pleasure, and sometimes that’s just what people need. On a sunny day on the banks of the Avon, few cities are as pleasant a place to be.

Getting there
Aer Lingus and Ryanair fly to Bristol several times a day.

The Airdecker bus runs from Bristol Airport to Bath bus station, in the centre of the city, every half hour; £20 return

A car would be useful to visit the largely National Trust-owned village of Lacock, Stonehenge and other sights nearby

Stay
The Gainsborough Spa: five-star luxury. It has its own spa that draws water from the hot springs. From £250. thegainsboroughbathspa.co.uk.

Park Farm Barn, Corsham: Rural B&B next to the villages of Corsham and Lacock. From £85. parkfarmbarn.co.uk

Visit
Jane Austen walking tour and guide. You can download it here

Day trip
For a quick taste of another film set, deep in the English countryside, take a trip out to Lacock, which played the part of Meryton in the BBC’s 1995 version of Pride and Prejudice, with Colin Firth as Mr Darcy.

Margaret Ward is studying for an MA at Bath Spa University; @mwardjourno