A Gold Rush in Italy, with nuggets the size of breadcrumbs 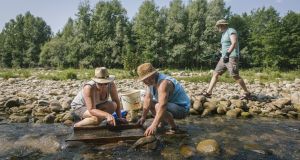 Italy may not be the first place that leaps to mind when you hear the words gold rush.

But for thousands of years this neck of the northern Piedmont region, what some call Italy’s Klondike, has attracted prospectors seeking gold flowing down the Elvo River from deposits left eons ago by receding Alpine glaciers.

Gold rushes in the area have ebbed and flowed over the centuries, but they have seen a revival in recent, recession-hit years. Increasing numbers of people have been contacting local gold-seeking associations hoping to get rich quick.

Last weekend, panners from around the world even descended on a clearing for the Italian Goldpanning Championship. Under a hot sun, they stooped knee deep in mucky water, swishing sand and gravel around a flat grooved pan in search of gold specks.

“Some people have the idea that you go and find gold like an ATM machine,” said Arturo Ramella, one of the founders of the 30-year-old Biella Goldpanning Association, which hosted the competition. But in Italy, most of the nuggets to be found are about the size of breadcrumbs.

“We know you can’t live off of this so we try to discourage people,” Ramella said. “There are some retirees that go every day and if they find a flake or two it can add up, but it’s not going to substitute a salary, not in Italy.”

That said, the area has more than a hint of gold fever “because there is always the possibility to find gold here — it’s a very attractive stream,” he said.

The Elvo runs alongside the Natural Reserve of the Bessa, a former open-air gold mine that for about 100 years between the second and first century B.C. was the “ancient world’s biggest gold deposit,” said Aldo Rocchetti, the director of a museum about the Bessa gold field in Vermogno.

If the Romans were able to conquer as much of the empire and as quickly as they did in Republican times, it was in large part thanks to this gold “that paid for arms and mercenaries,” Rocchetti said.

The arena where the Italian championship was held is called Victimula, in honor of the ancient population that was conquered by the Romans and was likely used as labor in the ancient gold field.

The first competitions started in Finland in 1978 and the world championships will be held in Scotland in August (the Times photographer Gianni Cipriano and I are volunteering to go), which tend to be hotly fought — if fun — contests.

Competitions not only let people measure themselves against others, but they are also a good indication of how much gold one is not finding when panning in a stream.

“It’s all about practice,” said Ramella, who is also the president of the World Goldpanning Association.

Competitors bring their own pans, which can vary in size, depth and number of grooves, but must conform to association specifications. For the most part, wood and steel pans have been replaced by plastic models, and a lightweight flat speed pan colloquially known as the “Ferrari pan” has become popular.

“Actually, we call it the Aston Martin pan,” said James Linnett, a British newcomer to gold panning who has already racked up a number of medals in competitions, as well as nuggets of varying sizes, which he proudly showed to other competitors. He plans to melt some of the gold for a band for his fiancée for their wedding next year, a practice that is popular among goldpanners.

Linnett complained that television reality shows broadcast in the United States and the United Kingdom glamorized prospecting, “making people think they can pull out ounces from rivers,” but the reality was that goldpanning required a lot of hard, patient work. “Only one or two small pieces in a day is a good day,” he said.

If gold panning today is mostly a hobby, it was far less fun for legions of often forcibly employed miners who worked in the neighboring gold-rich Alpine valleys over the centuries.

Until the mid-20th century underground mines were still operating in the Anzasca Valley, to the north, which over centuries lured thousands of workers from around Italy.

“It wasn’t so much a gold rush as a rush for employment,” said Gloria Casella, whose husband owns the Guia Gold Mine, the only one open to visits. It was backbreaking and dangerous work as the gold was extracted first using lead and then cyanide.

“They were forced to work like animals,” said Riccardo Bossone, her husband, and many workers also died of black lung disease. It was known as “the valley of widows and orphans,” he said.

“What’s worse is that they came knowing that they would die young,” he said. “A tragedy.”

All the gold mines in the area were eventually shut because labor costs outweighed profits. “There is more gold under the Monte Rosa than in Africa, but because of costs and environmental laws it isn’t mined anymore,” Rocchetti said of one of the principal massifs of the Pennine Alps.

Today, gold prospecting in Italy is done mostly in streams and rivers in Piedmont, Lombardy and the Aosta Valley. Regional laws cap to 5 grams the amount that can be found in one day.

“I wish! You never find more than a few grams,” said Giuseppe Pipino, the Italian who brought competitive goldpanning to Italy (though he no longer participates).

“We’re more about teaching families about gold seeking,” said Pipino, whose own association is based in the Orba Valley, around another gold-rich stream.

Like other prospectors he did not see the need to use metal detectors. The gold in Italian rivers is often too fine to be electronically detected, “and around here it would sound continuously because of the bottle caps,” he said.

(One Italian showed off a 49.7-gram nugget that was said to be the biggest found in the area in 1,200 years, but declined to say where he had found it for fear the area would be invaded.)

Regional laws regulate how gold can be panned. In Piedmont, for example, mechanical means are outlawed and hunting must be done using pans.

“But in foggy seasons, there are some people who excavate huge holes on the streams. It’s an environmental problem, and then all panners are seen in a bad light,” Ramella said. “We learned from old-timers, who had a code of honor.”

Giorgio Bogni, a gold seeker and geologist from Sesto Calende, spends as much time as he can on streams. “Goldpanning is fun — it’s a hobby, but it’s also a form of meditation, in nature, with the sounds of the river around you,” he said.

“It’s usually a grueling day’s work,” he added, “and you come home and your wife looks at the two atoms you found and says, ‘Is that all?’ But I’m happy.”

Irish conductor the first woman to lead orchestra at Oscars
8

How to make Michelin-starred spaghetti in 10 minutes
10