Gemma Tipton gets to grips with wonderful Vietnam 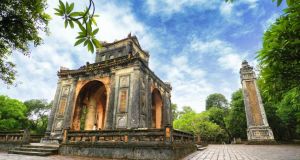 Stepping out into the hot Hanoi night, I feel a wave of excitement. It could be a combination of things: the exotic mingling smells of jasmine and fish, the unfamiliar sights of French colonial and Chinese-inflected buildings cuddling together, the simple act of actually achieving crossing the road . . . Whatever it is, the tiredness of long flights is shaken off, and I’m ready for an adventure.

Home to more than 7 million people, Hanoi was established more than 1,000 years ago on the banks of the Red River, and is dotted with lakes. Scooters hurl themselves in swarms along the roads, and crossing involves gamely claiming your territory on the tarmac with a purposeful walk. Later, a rickshaw ride will reveal how businesses cluster together, as we pass along the street of bamboo ladders, the lane of flower sellers, the road of cuddly bear shops.

Street food stalls are everywhere, as cone-hatted sellers squat, adding sauces to freshly chopped vegetables, sizzling fish over small charcoal stoves. It’s exciting but unthreatening, and while street sellers may want to entice you, they don’t hassle. We’ve headed to a restaurant, where a tasting menu introduces us to amazing Vietnamese food, with its winning combination of French, Chinese and Thai influences. It’s all washed down with a lovely light, pale lager. I could have tracked my progress through Vietnam by means of the local brews. From Hanoi Beer in the north, to Saigon Special, 1,760km south, I steadily fell in love with this wonderful country.

I’m on a two-week trip with TDactive Holidays, a branch of Travel Department that sends small-ish groups (there are 19 of us) on itineraries that, in Vietnam, include cycling to mountain temples, swimming at Ha Long Bay, climbing ancient stone steps to discover Indiana Jones-type temples deep in the Marble Mountains, river trips, and fascinating insights into the country’s rich and troubled history.

Vietnam should have been heaven on earth. Just 40km wide at its narrowest point, but with miles and miles of coastline (both beautiful and strategic), mineral resources, and a fertile tropical landscape and climate, it has been under attack for much of its history. China had it for over 1,000 years. The French colonised it, Japan occupied it, and most recently the American War saw the dropping of millions of tonnes of bombs, and the spreading of Agent Orange and Napalm across the land.

That war ended with the fall of Saigon, now renamed Ho Chi Minh City, in 1975; and a visit to the War Remnants Museum in that city at first leaves us profoundly sad through its collection of contemporaneous newspaper headlines, photographs and artefacts. Then, little by little, I become furiously angry, both at what people seem capable of doing to one another, and the horrible rhetoric that surrounds their ventures. Yet the Vietnamese themselves seem to be forgiving and pragmatic. “It’s in the past,” they say. “The American soldiers were only children. They didn’t want to be here either,” I’m told. Groups of veterans on both sides now meet, swap stories, organise charitable projects.

In fact, the Vietnamese themselves are part of what makes this beautiful country so brilliant to visit. While it’s misleading to characterise an entire nation, overall they’re gentle, kind and yet have a great sense of humour and entrepreneurial fun. They’re also proud of their country, its history, and all it has achieved since the war. It’s officially a one-party socialist/communist state, but things are opening up, and while you might not see the presence of a Starbuck’s as a sign of joyous progress, it’s a signal of a general deregulation which has seen the country lately achieve one of the highest growth rates in the world.

Like the Starbuck’s springing up, this is a mixed blessing. The coastline of Da Nang could be nice in a few years – but only if thick strips of resort hotels are your thing. Head further south to lovely Hoi An for what must be one of the most beautiful beaches in the world, where little restaurants have tanks of fish swimming in cool water, ready to become lunch. We have three days to explore the area, so I try my hand at paragliding, and bring a couple of dresses to the local tailor’s to be copied. Tailoring and silk are big in Vietnam, and they’ll rustle you up anything you like overnight. A silk dress costs me about €20.

In the Phuc Kien Assembly Hall in Hoi An, built in 1690 to the Goddess of the Sea, we light coils of incense which, we’re told, will burn for a month. Hung within are our written wishes and hopes. It’s surprisingly moving, and I find I’m even now enchanted with the idea of mine, burning still.

We set up a WhatsApp group to share photos, and soon discover that, disparate as our group may have initially seemed, we also share a sense of humour. There are some couples, a number of retired people, a pair of adventurous friends, and a handful of us who, for whatever reason, are holidaying alone. The ages go from late 30s up, but we’re all keen on adventures, and Whatsapp proves excellent for pooling resources on unexpectedly great restaurants and brilliant bars – such as the one in Saigon that turns out to be a dentist’s by day, and the one in an alley you may not have otherwise dreamed of venturing down (Bep Me In – it’s brilliant). It’s a good way to travel if you’re semi-independent, and I’m not surprised that many in our group go on Travel Department trips every year.

We visit Hue, the former royal city, and are astonished en route by the temples deep in the Marble Mountains, though slightly less enthused by the Dragon Boat on the Perfume River. Perhaps the romantic names overly raised expectations. Apart from the day at the beach in Hoi An, it’s a hectic itinerary. We take a coach to the Cu Chi Tunnels, the underground network used by Viet Cong soldiers to hold off the American forces. I force myself as far as visitors can go. Tight, hot, dark, claustrophobic, it’s an intense experience. There’s an opportunity to fire an AK-47 assault rifle, but I found that, after seeing the traps the Viet Cong had invented to snare their enemies, I’d had enough of what human ingenuity can produce in terms of maiming and killing. Instead, we go for lunch, and I have more beer.

On our way to the Mekong Delta, where we’ll take a boat to see the floating vegetable market (the market floats, not the vegetables), we stop at Tay Ninh, the Holy See of the Cao-Dai religion. A combination of Buddhism, Christianity, Taoism and Confucianism, Caodaism was founded in 1926. It all seems rather wonderful until I learn that, oddly, the French novelist Victor Hugo is one of its saints. I have also been reading Graham Greene’s The Quiet American, set in Saigon, and presciently published in 1955. He is somewhat scathing about the Caodaists, so I remain sceptical.

Still channelling Greene, we go to the Rex Hotel in Saigon, where I have a Five O’clock Follies cocktail on the rooftop bar. It was the name the journalists gave to the American Press Briefings held here during the war. And lest you think it’s all about booze, I also fell for the charms of fresh coconut, drunk directly from the fruit – heaven. Nonetheless, when we also go by boat along one of the Mekong’s many tributaries and, at a place where they make coconut sweets, I discover a vat of alcohol filled with snakes, I have to take a sip. I’m told it’s “good for lady strength”, so I have two shots. Whatever it does for me has yet to be revealed, but I’m hopeful.

During our trip, we spend a night on a junk boat at Ha Long Bay, which feels very Agatha Christie, we travel by tuk-tuk through the jungle, and wander in fields of exotic fruit. I wish we had more time for everything. Vietnam is gorgeous and glorious. I feel privileged to have been.

Travel essentials: what to bring and what to buy
Hot weather and humidity mean that even though Vietnam isn’t in any current Malaria hotspots you’ll want some bug spray to keep bites at bay. Dioralyte is handy to replace body salts in the heat. Depending on when you travel, you may also expect downpours, but there’s no need to pack a mac as street sellers suddenly appear, and an all-enveloping poncho of plastic will only set you back about €1. We also bought straw hats and fans to cool down.

Vietnam is famous for pearls, rubies, jade, silver, tailoring, leather work and knock-off handbags. Bring any beloved clothes you want copied, and they’ll run you up replacements overnight. While you’re waiting, enjoy excellent massages for a fraction of the cost you’d find at home, though I avoided the one that offered “acupressure in ass and massage hind legs (5 mins)”, fearing too great a range of cultural differences.

The Vietnamese dong has seen hyper-inflation, which means you’ll soon find yourself a millionaire. €1 is about 25,000 VND. Get currency at ATMs everywhere, though some daily withdrawal limits and fees apply. US dollars are widely accepted and welcomed. Bargain for your goodies, and make sure there’s plenty of room in your suitcase to bring your new things home – especially after a visit to Saigon’s many markets.