Walk for the weekend: Some 200 hardy international hikers take the annual 10-hour trip from Mount Brandon to Annascaul 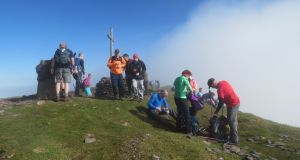 A section of the walkers reach the summit of Mount Brandon

Like many other walkers, I like to take advantage of the long daylight hours of summer to take a tilt at a good long ridge walk. This year I decided to sign up for the “Tom Crean Ednurance Walk”, which is run by the Annascaul Walking Club as a tribute to their most famous son, who was a member of both the Scott and Shackleton expeditions to Antarctica. He subsequently retired to Annascaul to run the South Pole Inn.

The walk was first undertaken in 2013 when 40 walkers took part. It is a measure of its success that when applications for the 200 places for this year’s walk were invited on the club website in February, the event was oversubscribed in two hours.

An international group, Irish, English, American, German, Swedish and Norwegian gathered at the South Pole Inn at 6.30am on June 17th and were then bussed to the base of Mount Brandon.

The first part of the route was via the well-marked Saint’s Road to the summit of Mount Brandon (952m). The cloud had come down at the start accompanied by a brisk south-west wind which, while it deprived us of the wonderful scenery, spared us the baking heat that the rest of the country was experiencing. The group was well spread out by now with the more agile participants steaming ahead while those of us who were only capable of proceeding at a more sedate pace trundled happily behind them.

Navigation on the Brandon ridge is straightforward as there is a path running south past Brandon Peak (840m); across the narrow ridge of Gearhane (803m); and down a boggy slope to the col of Mullach Beal (Grid Ref: 457 066), where our names were checked and a large stash of water bottles awaited.

A last slog up to Ballysitteragh (623m) allowed us to turn east and head across grassland to the Conor Pass car park, where we were name-checked again and treated to mounds of sandwiches.

The topography to the east of the Conor Pass is featureless moorland. To ensure that no one went astray, the organisers had planted markers, each of which was in sight of the one ahead of it.

The first peak on this section is An Cnapán Mór (649m) and from there it is a five-kilometre slog across the uneven plateau to the final ascent of the day to the summit of Cnoc Mhaoilionain (583m). A south-easterly bearing brought us down the steep slope to An Cnocán (Grid Ref: 583 039) where a final supply of water awaited. There is a choice here of taking the road back to Annascaul, but Marion Kennedy, who had been detailed to shepherd the back-trailers, brought us down a trail beside the Annascaul River which ended in the garden of the South Pole Inn. There we were presented with the Tom Crean Medal by Enda O’Brien, his grandson, to mark our endeavours on one of the most enjoyable walks I have completed.

The quiet efficiency with which this superb walk was run is a tribute to the hard work and organisational skills of this most friendly and enthusiastic of clubs.

How to get there: Take the second exit at the roundabout west of Dingle town (R549). After 9km go right at the fork signposted for Mt Brandon. After 750m turn right on to An Baile Breac Road which will bring you to the car park

Time: Should be completed in 10 hours but some leeway is given if walkers reach Conor Pass in six hours