I made a joke about Mayo and Canada. The Canadian was not amused

MIchael Harding: I didn’t think anyone would take offence in a filling station in Castlebar 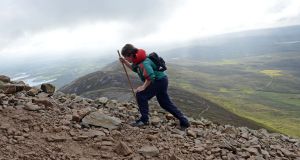 I told him I thought Mayo was flat, apart from the Reek. Photograph: Eric Luke

“I didn’t realise how big Mayo was,” I said to a man in a filling station on the edge of Castlebar. “It’s as big as Canada.”

He was at the window on a high stool, toying with a mug of coffee, like he might have indigestion.

There was something about the size of him, the red face, the soft blue eyes, sunken deep beneath his brow, that made me think he might be someone I once knew from Belmullet.

“Have we met before?” I wondered.

I spoke my name, reached out a hand, and he reluctantly put his out to accept it.

“Farrelly is the name,” he said.

“Are you from around here?” I persisted.

“Canada,” he announced, without smiling.

I felt instantly ashamed of my inane joke; to have compared Mayo to the vast landscape of Canada was silly, but I didn’t think anyone would take offence in a filling station in Castlebar.

“I wasn’t trying to insult Canada,” I said, “but the plains of Mayo are long stretches of flat land covered with snow in winter; and that’s what I remember of Canada. Am I right?

Outside the window Croagh Patrick towered into the sky above us.

“So you think Mayo is flat,” he muttered.

“Apart from the Reek,” I admitted.

Not the full shilling

I wouldn’t like someone to think I wasn’t the full shilling just because I made a joke, so I tried to impress him further.

“I’m buying it from Ara Motors,” I added, just to be precise. “They’re wonderful people.”

“Oh, I used to have a camper van myself,” he muttered. “You need to be careful about the heating; they can be cold in winter.”

I said: “Mayo is not as cold as Canada.”

“How would you know?” he wondered.

“Because I was in Canada many years ago,” I declared proudly. But he wasn’t up for conversation. He zipped up his anorak and sighed, like a man burdened by stories that will never be told.

As he left I watched him walk towards a 181 Ford Focus with Dublin registration plates and I guessed he rented it at the airport, and I wondered what had taken him all the way from Canada, alone, on an autumn day.

I remember spending part of January in Canada, more than 20 years ago, meeting students at a university who were putting on a play of mine; lovely chubby teenagers in anoraks like wrap-around duvets, with a ferocious appetite for something as exotic as an Irish writer.

I stayed a week outside the city, in the rustic home of a young professor and her husband, a computer engineer, and I loved their breakfasts of eggs, ham waffles and syrup-laden pancakes, with lashings of coffee.

Everything was buried in snow and I slept a lot even in daylight because it was so cold outside.

When the professor went to work the engineer dozed on a sofa in the lounge watching telly. Some neighbours came now and again, talked, drank coffee, watched news bulletins and grumbled about how close to -40 it was outside.

I listened from the bedroom.

The engineer clung to the stove by the television. Whenever I tried to talk with him he appeared to be in a semi-conscious dream state.

He said Canada was a place where people look at the sky.

“After you’ve seen the snow for a year or two,” he said, “there’s nothing else to look at. So you start thinking about the clouds.”

“And how do you pass the winter?” I wondered.

His pronunciation sounded alarmingly like “ass-hole fishing”. And my mind struggled to keep various images at bay.

“Ice. Holes,” he repeated, stressing the “ice”. Sometimes he took me to the basement; a white silent world where he gazed at blue screens, smoked, and where he said he did a lot of thinking.

One day he was watching me across the table like a sad mastiff in a rescue home for dogs.

“My grandmother came from your country,” he announced. “Some place called Kinnegad. She came as a war bride in the 1940s; but she never went back.”

I thought of that engineer again as I watched the Ford Focus drive away from the filling station in Castlebar; perhaps sometimes people do come back, I thought, in secret, without wanting anyone in the world to know why.