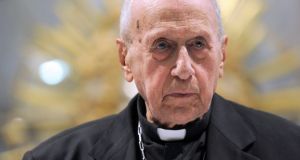 Cardinal Roger Etchegaray, a skilled diplomat and troubleshooter dispatched by his friend Pope John Paul II to negotiate for the Roman Catholic Church with Fidel Castro, Saddam Hussein and leaders of the Chinese Communist Party, died on September 4th in his native French Basque country. He was 96.

His death, at a retirement community, was announced by the Vatican.

During his decades of service in the Roman Curia, the bureaucracy that governs the church, Etchegaray headed the Vatican’s main relief agency and its department for peace and human rights. He visited Bosnia and Rwanda during their conflicts and paved the way for John Paul II’s historic visit to Cuba in 1998. He also led the church’s ultimately unsuccessful efforts to stop the United States from invading Iraq.

“He was a zealous pastor and loved by the people he was called to serve,” Pope Francis said in a statement. “He was an adviser who was listened to and appreciated, especially in difficult situations for the life of the church in different regions of the world.”

Etchegaray was a strong voice in the church against anti-Semitism and worked to repair Catholic relations with Jews. “Our thoughts must turn in particular to the Jewish people,” he said during a meeting of bishops in 1983, “because it is they who, among all peoples, must be the first beneficiaries of our double mission of reconciliation and penance.”

Roger Etchegaray was born on September 25th, 1922, in Espelette, a Basque village near the Spanish border. He was the third child of Jean-Baptiste and Aurélie (Dufau) Etchegaray. His father was an agricultural mechanic.

He attended seminary in the nearby city of Bayonne, near his native village, and moved to Rome to attend the Pontifical Gregorian University, where he studied theology and received a doctorate in canon law. He was ordained in 1947 and returned to Bayonne, where he served as a priest and as secretary to the bishop.

Pope John XXIII called him to Rome in 1962 to participate as an expert in the Second Vatican Council, a series of meetings that profoundly transformed the church, opening it to the modern world. He played an important role in connecting bishops from different countries with one another, and he was close to scholars who combined Catholic theology with secular philosophy, a key force in the church’s opening to the outside, Massimo Faggioli, a church historian at Villanova University in Pennsylvania, said in an email.

In 1969, Pope Paul VI elevated him to bishop, and the next year he became the archbishop of Marseilles, a position he held for 15 years. He was named a cardinal by John Paul in 1979 but did not participate in the conclave to elect a successor when John Paul died in 2005; by then, Etchegaray, at 80, had surpassed the age limit to vote for a new pope.

He would, however, go on to make his name as a Vatican power broker.

In 1984 John Paul II summoned Etchegaray to Rome once again, this time to become a member of the Curia. From that perch he became an influential voice in the Vatican leadership, heading both the charitable arm Cor Unum and the Pontifical Council for Justice and Peace. He was also entrusted with overseeing the committee in charge of the church’s Jubilee year observances in 2000.

Etchegaray’s friendship with John Paul deepened, as did the pope’s reliance on his diplomatic skills. He was sent to China, where the local Catholic community struggled with the Communist Party’s efforts to control the local churches, four times between 1980 and 2003.

At the time, the Castro regime still proclaimed Cuba officially atheist. But it was slowly growing more accommodating of Catholicism, which maintained deep roots there. The cardinal received a nativity scene as a present from Castro and then celebrated a Mass attended by thousands in Havana.

“What message should I take to the pope?” he asked the crowd, which replied: “To come! To come!”

Nine years later, John Paul did. And Etchegaray kept the nativity scene in his living room.

“He was very proud of it, and he showed it to everyone who came to visit,” Andrea Gagliarducci, a Catholic writer and friend, said in an interview.

He officially retired in 1998, but he kept travelling as a papal envoy. In 2003, he flew to Baghdad for secret talks with Saddam in an effort to avoid a war.

“One must never lose hope in peace, until the very end,” he told a French radio station at the time, “especially if you are a believer.”

Expert tips: A dentist on how to have perfect teeth
7