What’s worse than a fat man squeezed into small togs? A man my age in tattered togs

Michael Harding: Such moments of openness are dangerous because they form the threshold of love; when a stranger becomes a beloved 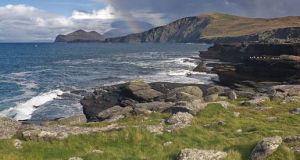 West Kerry: I had to be careful in a cottage on the west coast of Kerry with a beautiful Russian artist

Recently I woke up earlier than usual because of the light. There was so much radiance seeping through the curtains that I thought maybe someone had dropped Boris Johnston into the garden. Only he, or a nuclear explosion, could cause such a glow, I thought.

But we don’t have any nuclear reactors in Leitrim, and it’s not the kind of place people are queuing up to bomb. So I thought it must be Boris in a parachute looking for the Border.

I rushed to the window and opened the curtains, whispering “Boris” and imagining his radiant face floating over the mountains; but it was only the sun.

So I went for a walk up the hills and met a neighbour woman with her two dogs.

“Isn’t the weather great,” she said. “Sure we don’t know ourselves.”

“We don’t know if we’re coming or going,” I added.

“That’s the truth,” she agreed, with great sincerity, and I could see a light in her eyes.

The weather was so good that I couldn’t settle to work, so I went into Carrick-on-Shannon.

I had decided to start swimming again for the winter. I even went to Sports Direct and bought a new pair of goggles and togs because there’s only one thing worse than a fat man squeezed into a pair of small togs, and that’s a man my age parading around in tattered swimming togs.

I changed into the new Speedos and sat in the sauna with a woman I didn’t know, and I stared out through the glass wall at the sun, wondering why she looked so sad on such a day.

“It’s great weather,” I declared, at last.  She looked around at the swimming pool area, the showers, and the wet naked white males waddling in and out of the steam room. She displayed enormous detachment. I sensed she couldn’t give a flying flamingo what the weather was like outside. She was clearly enduring too much bad weather on the inside.

“I hear you have another book coming out,” she said eventually. “What’s it about this time?”

But nothing could comfort her. She rose from the bubbling waters with great difficulty, and headed off to the changing cubicles as if all the lights inside her had been turned off.

When I was in Cill Rialaig on the west coast of Kerry a few years ago I stayed in an old cottage which is part of a wonderful arts centre; it’s a village of many houses were artists from all over the world come on residencies to create new work.

The first thing I did when I arrived was place an icon on the stone wall of the old cottage. It was hand painted, or as they say in Belarus, written, in the tradition of the Kazan icon.

Beneath it I placed a small oil lamp, lit the wick and instantly the ocean and the mountains and the cliff edge where the tiny cottage was nestled came into clearer focus. It’s not that I was gazing at the icon. But like a lamp in the corner of a room, it made everything in my world warmer.

There was a Russian painter in one of the other cottages in the village. She came one evening and took tea with me, and though she didn’t make any comment about the icon there was a lovely warm light in her own eyes when she spoke.

She told me that when she paints everyone else leaves the room.

“I get so involved in the process,” she explained. “And eventually even I leave the room.”

I knew what she meant. She was speaking of the forgetfulness that happens when we encounter beauty. When the thing we are doing becomes more real that the ego. When something beautiful in the universe calls us out of the ego cage we are trapped in.

Myself and the painter sat in silence as the ocean waves thumped against the cliffs below. Such moments of openness are dangerous because they form the threshold of love; when a stranger becomes a beloved. And my beloved was in Leitrim. So I had to be careful in a cottage on the west coast of Kerry with a beautiful Russian artist.

Not that I have many such threshold moments any longer, apart from those solitary mornings in the garden when the light slants at a sharp angle and every leaf appears like the fingerprint of an unseen beloved and I am absorbed in its radiance.

Do we need to be concerned about taking a Covid-19 vaccine?
8