‘I was annoying through my childhood and insufferable in my teens’

Oh, Brother: More than two and you form alliances to wait out the most traumatic years of sibling rivalry 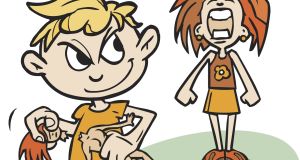 My brother and I didn’t get on well for years. Research suggests that there is heightened conflict in houses with just two siblings; that the sense of competition for resources such as love and Dairy Milk is more intense without the buffer of other children.

When there are more than two, you can form alliances to wait out the most traumatic years of sibling rivalry and bullying. When there are just two of you, and you are the younger, smaller one (as I am/was), there’s nothing to stop you being locked in cupboards or mercilessly taunted about your oversized forehead for 20 years straight.

To think about it from my brother’s perspective, I was annoying through my infancy and childhood, and probably objectively insufferable all through my teens.

Reader, I revelled in his tribulations.

The time he tried to dye his hair blue but it only took on his scalp. The time, shortly after he met his first girlfriend, when he came home with a suspicious amount of sparkly stuff all over his face, and I crowed about it as loudly as I could so that our mother would deliver him a sermon for what was, in retrospect, completely normal if aesthetically unsavoury adolescent behaviour.

Almost 20 years after that particular incident, my brother is now married to someone who is far less interested in glitter than his first girlfriend. He rang me a few weeks ago to say that his wife is going to have a baby. Old patterns are hard to break, so I couldn’t resist asking whether she was having the baby with him, but once I’d got the essential petulant jab in, I just felt happy for them. This will be the first baby in our direct family. The first infant partially created by someone closely related to me; the first member of the next generation of our family.

Philosophers have a lot to say about time. They talk about whether it is linear, whether it is an illusion, what its relationship is with change. Regardless of the fact of the matter, time does not feel linear, or straightforward. It becomes tangled in memory so that recent events can seem far off while distant memories can have the freshness and urgency of the present, delivering you back into years-old joy, or trauma, or whatever else, as though you are experiencing it all over again.

My brother is very different now to his teenage self, but there are occasional flashes of the boy in the man. I see him there in the slight awkwardness that reveals itself sometimes in groups, or in the endearing way he gets muddled when complimented, his hands instantly going to his pockets, eyes looking anywhere but into those of the offending flatterer, and his cheeks flashing with a soft, ruddy self-reflection as the nice words clang against the hard uncertainty of the boy who never quite knew how to believe the good in himself.

For now, the foetus is, I’m told, around the size of a lemon, and busy with growing into a person over the next few months and giving my sister-in-law hassle that will no doubt be good practice for parenthood. The baby that will be born is a literal harbinger of change; a signal of the transfer of vitality and energy to a new generation.

I don’t mean “energy” in a new-fangled, hippy-dippy way. I mean it literally. Babies are exhausting and rightly leech the focus and stamina of their carers. It – the lemon – represents a fundamental and enormous change within our small family. It triggers a shift in our reality, and a statement from my brother and sister-in-law that they have assessed their life and relationship, and found room for another person; another one of us.

I’m proud of my brother. In the absence of a male role model, he has built himself into a man who is solid enough to be one for someone else. Even though I can vividly recall him smashing teacakes against his forehead and then eating them in one bite for my entertainment, I have every faith in his ability to be a good parent, along with his wife, even if their baby inherits the vast family forehead (which my brother shares, by the way).