Michael Harding: I didn’t show emotion. I sorted all that out in the garden on Sunday 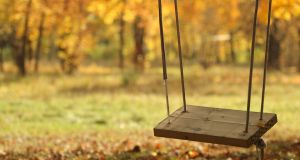 ‘By the end of the week the daughter had begun her new life in Australia. I went out one morning, sat on the swing and rocked gently in the still air.’

It was a dry autumn afternoon last week when the daughter went away; her, and a young lad from Donegal. They packed their bags on Sunday night and we drove them to the airport on Monday evening.

She didn’t show emotion in the car, other than excitement at the thought of heading to Moscow that night, and Bangkok the following day, and eventually to a new life in Australia.

I didn’t show emotion either. I sorted all that out in the garden on Sunday, when there was no one to see me cry, and no witnesses other than the trees to know how I felt.

The garden was always a refuge; an acre of oak and birch around the house, in a sloping field on the side of a hill. And it was quiet on Sunday; apart from a few cars in the distance, heading towards church in Arigna.

It slices the demons of negativity in little pieces, as the ferocious blades flail the grass

I put petrol in the lawnmower, pulled the starting chord and the machine coughed into life. It made a hum like a small motorbike, and it soothed me as I manoeuvred around the trees and along the ditches of high grass.

It’s a hum that drowns out all else. It rinses the heart with a clean single pointed calm. It slices the demons of negativity in little pieces, as the ferocious blades flail the grass. Mowing grass has always been a consolation to me. I remember slow Saturday afternoons as a child, when the little suburban lawns outside Cavan, dainty as manicured fingernails, all hummed with the same high-pitched screams of baby lawn mowers; as if everyone was in pain and the only release was to waddle around the garden behind a mowing machine, and allow it to do the screaming.

But over the years the lawnmower became my ally. It’s hum often made a blanket for my sorrow; the sound of it gave me something to hold on to, like a monk gripping his mantra with single pointed attention.

So there I was on Sunday afternoon, following a machine for two hours, as it walked me around old memories. Like the tree my mother gave me when the child was christened. The rose bush that came from a garden in Clare where my father once lived. The bay tree Tom McIntyre sent. And the wild rose my beloved planted on my 60th birthday. Not to mention the little rose the child planted herself, and the box hedge she trained the dog to jump across like a race horse when she was seven.

A garden is like a novel, full of memories, and storylines and emotions I’m still living through. The big chestnut was a wedding present; we kept it in a pot for four years, until we found the right spot for it. And nobody knows who planted the Chilean beech trees, although by the size of them, I reckon it may have been an archangel.

And I was shocked to find the swing, still intact, hidden among the pines; the red plastic seat faded

Beneath the trees and in all the ditches there are numerous ornaments and old relics that were lost over the years. I found a tennis ball on Sunday in the weeds. And a wooden trolley in a ditch which she used as a child in winter, to shift snow. I found the old sweeping brush she used as a jump for the dog when she was training him to be a racehorse. And I was shocked to find the swing, still intact, hidden among the pines; the red plastic seat faded and the blue ropes frayed to their last few threads.

It brought to my mind another long ago autumn day, when I watched her sitting on it, with a satchel on her back as she waited for the schoolbus to take her off to her first full day of education.

The trees hold me; their branches nurture me more effectively than the arms of a good mother. Sometimes they are like a cathedral of impermanence; in summer they burst with birdsong and in winter all the dead leaf rustles with hidden life beneath my feet. But only in autumn do they go silent; as if they were frightened of death.

By the end of the week the daughter had begun her new life in Australia. I went out one morning, sat on the swing and rocked gently in the still air. I intended cutting the ropes and throwing the old plastic seat in the recycling, but there’s something about an empty swing that is untouchable; and there’s an absence in it, which nothing can cure.

A surgery attached to a house is adding €27k to the stamp duty, what can we do?
4