‘I have been free from melancholy since the heart attack. The stent woke me up’

But leaving Donegal and driving through Leitrim, I felt sad again and lonely . . . until I saw her at the door and realised that the beloved is the key 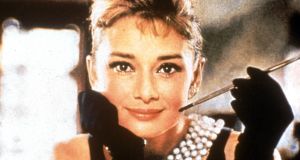 I was invited to a fancy dress party one night and had a great time with Mary Poppins, and a big red Pepper, and a bearded Cleopatra, and two Audrey Hepburns who threatened to fight each other for the title of Best Audrey of the Evening. Photograph: Hulton|Archive

I was never lonely in the camper van. Except at night, when I’d be making up a bed in the back, just for myself.

It felt like having no home. No solid roof above my head. I’d squeeze into the back and lie there, frightened, especially when young men came in their blackened out sports cars, and parked nearby; their engines humming and their faces lit up by the glow of smartphones, as they texted women on the other side of the mountain.

Mostly, I enjoyed the wilderness in solitude, watching through my own blackened windows, as the stars shone, and then faded, and the grey mountains emerged in the dawn, as silent and stealthy as a big wolf.

The only problem being that the van was old and not comfortable. Sometimes I woke with a fierce headache, my muscles as stiff as if I had been lying in a coffin, because, as I discovered halfway through the summer, the gas canister in the cooker was leaking.

It certainly wasn’t a posh van. The black paintwork was faded, the mudguards were rusting, the grey curtains on the side windows were in tatters, and I wouldn’t blame anyone for supposing it was a hearse, especially on certain afternoons when I was stretched in the back like a corpse.

At night, I drank a solitary glass of wine as the sun set and I’d FaceTime the beloved to assure her that I was still alive.

Sometimes, I took a nap in the afternoon if I found a remote spot with a beautiful view.

One day, a man appeared out of nowhere, walking towards the van, with car keys in his hand, jingling them as he walked; the way off-duty guards do, when they’re thinking.

He looked in the window and tapped the glass.

I assured him I was alive.

“I was just having a siesta.”

And then he told me his life story, and ended with a familiar phrase.

“I’m on tablets,” he whispered, looking at the beautiful landscape as if he didn’t see it.

I suppose if I was a therapist I could station myself in a van near any village in Ireland and do a lot of business.

But it occurred to me that I myself have been free from melancholy since the heart attack. It’s as if the stent woke me up, and triggered a sense of wonder in me again.

Although my summer in Donegal wasn’t entirely monastic.

I was invited to a fancy dress party one night and had a great time with Mary Poppins, and a big red Pepper, and a bearded Cleopatra, and two Audrey Hepburns who threatened to fight each other for the title of Best Audrey of the Evening. I suppose there’s more going on in the hills of Donegal than people imagine.

I even met a man dressed as a fisherman.

“Who are you supposed to be?” I wondered.

And he told me he spends his leisure time on the little islands near the coast.

“I take some sheep out in a boat. They graze; and I catch mackerel.”

There was a light in his face; a look of surprise, as if the ocean had found him rather than him finding the ocean.

But even though I had rediscovered the Atlantic coast, I still had to go home to Leitrim.

When I crossed the county border at the river in Tullaghan I felt a sense of emptiness. Not the positive empty Buddhist buzz I get when meditating, but a flat emptiness, as sad as mist coming off a wet haycock; and which sometimes rises from places bereft of human society.

Donegal is well-populated; the laneways are stuffed with new houses, some of them the size of small shopping centres, and the gravel avenues are decked with tricycles and plastic swings.

But driving through Leitrim, where flooded fields screamed their desperation at the rain, and onwards across the drumlins of rushes, and past old houses in the Sitka forests, where children had not played for a very long time, I felt sad again and lonely.

Until I saw her at the door and realised that the beloved is the key. It’s not the mountains or the ocean that makes us happy. It’s not even the meaning we impose on it all. It’s just the unexpected presence of other people in our little worlds that makes the difference.

London Fashion Week: Paul Costelloe back in form with a little help from his son
6

Readers on sibling bullying: My tormentor was there every day . . . waiting
9