‘You had to speak fast and loud in telephone boxes then, while trying not to breathe in’

Hilary Fannin: Sometimes I long to be somewhere that’s not embroidered with memory 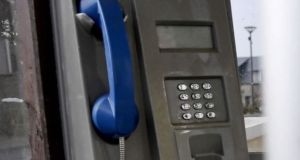 The way we were: You had to speak fast in telephone boxes, trying not to breathe in the pungent smell before the money ran out

I’d been walking on the cliffs, cutting in and out through the gorse and heather. My tongue was stained from blackberries, my shoes were wet. I went for a cup of coffee in the village. From the table by the cafe window I’d a clear view over the side gate of the church when the bell struck noon.

Built in 1899, the church is a kind of bulbous affair that sits slap-bang in the middle of a triangular plot bounded by streets on all sides. Beyond the apse is a narrow road that used to serve as the terminus for the city-bound double-decker bus.

As teenagers, in the days before Netflix and social media, we’d hang around there, watching the conductors put new rolls into their ticket machines. (Given that an Instagram photo of an egg got 32 million likes earlier this year, I don’t actually have any caveats around the idea of conductor-watching as entertainment.)

You’d get to know the different conductors a bit. Sometimes, on a Friday night, if you got a good one, he’d relent and, as we were too young to get served in the pub across the road, he’d take our crumpled money and head over to buy us two flagons of cider and 10 Grand Parade. We’d bring the cache back to someone’s box bedroom and lie around listening to Desperado, the tips of our cigarettes arcing through the dark.

At the front of the church there is a tower which, according to an architectural review of Dublin churches (which I mystifyingly found myself reading), features “four fine gargoyles on the corners”.

I think I know those gargoyles – at least three of them are regulars in the Harbour Bar. (You can’t really see the bar from the steps of the church, although, from their vantage point, the gargoyles must have a pretty good view of its mock-Tudor facade.)

The Harbour Bar used to be called the Cock Tavern. “See you in the Cock,” we’d shout down the line to one another when we were old enough to buy our own drink.

“The Cock, yeah?” we’d shout from the phone box at the Cross, finger in ear to block out the buzz of Honda 50s attempting to rev up at the lights. You had to speak fast and loud in telephone boxes then, while trying not to breathe in the uric pungency before the money ran out.

The old laugh-a-minute architectural review of Dublin churches, whatever about its fondness for the fine gargoyles decorating the tower, isn’t exactly fulsome in its praise of the church’s interior: “Quite nondescript. A simple nave with two short transepts underneath a simple wooden roof. The stained glass is unremarkable.”

We carried my father’s remains out of that unremarkable church one December morning. It had been a pretty jolly funeral; had he been breathing, he’d have appreciated the turnout. There was a lit Christmas tree in front of the church when we shouldered his coffin out of the heavy doors into the already gathering dark. He was a sailor; if you listened hard, you could hear the masts in the marina clank in the wind.

I’d had a text that morning from an old schoolfriend to say that one of our number, vividly alive in our recollections as a talented, soulful, very beautiful girl, had died suddenly

“Bob was not a big fan of Christmas,” my brother had said from the lectern during his eulogy. “But,” he added, looking at the coffin, “this is taking things a bit far.”

I drank, and watched the congregation leave the church. I’d had a text that morning from an old schoolfriend to say that one of our number, vividly alive in our recollections as a talented, soulful, very beautiful girl, had died suddenly. I didn’t know her as well as I would have liked. But that morning, watching the congregation leave the church, some of them making the sign of the cross at the stoup, the past felt deeply present.

I watched two little girls in white mantillas float out of the door. I watched older women in car coats, their obligation met, waving goodbye to one another with veiny hands. Sometimes I long to be somewhere that’s not embroidered with memory. Sometimes I recognise the privilege of living with our ghosts.

A middle-aged couple sat at the next table in the cafe, both reading the Sunday papers and eating fried eggs. She had lilac shoes, exactly the same colour as the heather I’d tramped through. The couple’s silence seemed neither companionable nor antagonistic, simply routine. He perused the sports supplement, she the magazine. Over her shoulder I read a headline about the secrets of great sex.

I suppose you never can tell.