New to the Parish: Evgeny Shtorn arrived from Russia in 2018 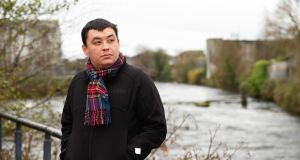 Evgeny Shtorn: “It’s about public understanding. So many people don’t even know direct provision exists but they are paying for it.” Photograph: Andrew Downes/xposure

Evgeny Shtorn didn’t plan on claiming asylum when he arrived in Dublin in January 2018.

He had hoped to secure a visa somewhere in Europe so he could continue working while he waited for the situation he had left behind in Russia to calm down. A prominent LGBT activist in St Petersburg, he was put in touch with members of Irish LGBT organisations upon arrival in Dublin who tried their best to find a way for the sociologist to remain in Ireland.

However, by March of this year, Shtorn realised he would have to formally apply for international protection and enter the direct provision system.

Shtorn’s departure from Russia was not expected.

He had been living in the country since 2000 and worked as a researcher at the Centre for Independent Social Research, a think-tank based in St Petersburg examining some of the most stigmatised issues in Russia society including migration, racism, environmental issues, gender and most importantly for Shtorn, LGBT rights.

Shtorn, who is originally from Kazakhstan, says St Petersburg was the safest and most tolerant Russian city for minority groups. However, legislation introduced by the Russian government under Vladimir Putin in 2012 led to a new sense of insecurity for civil rights groups operating in the city.

Under the new law, any organisation that received foreign funding and engaged in “political activity” had to provide detailed financial reports and register as “foreign agents”.

“It was clear this law had a strong link to Russia’s very paranoid past based on the idea that poor Russia is surrounded by enemies. It was the paranoia that there are foreign agents in the country.”

As part of his work, Shtorn collected data on the dangers faced by LGBT people living in a country where Putin is actively promoting anti-gay propaganda and where “state-sponsored homophobia” has become the norm.

“People are living in fear. This fear is expressed in many ways. Some people close off, try to find a corner where no one will find them and build a parallel life. Others say ‘I cannot live with this fear, I’d prefer to die’. But there are lots of activists who decide to speak out about this fear. I became an activist and was writing articles because I wasn’t able to live with this fear.”

Before he was forced to leave the country, Shtorn had applied for citizenship in Russia. In order to make the application he says he had to renounce his Kazak citizenship and live as a stateless person for five years.

However, his application was rejected on a “technical point” and he was invited to a meeting with what he thought would be immigration services. He was shocked to discover upon arrival that he was in fact meeting with police from the Federal Security Service who he said requested that he inform on his friends working in LGBT activism.

“It was punishment for being an actor in the field of human rights. The idea they had was he can’t really escape so he will work for us. But for me it was absolutely unacceptable.”

As soon as he left the office, Shtorn made contact with the Russian LGBT network and went to stay with a friend. The only option, he was told, was to leave the country as soon as possible.

Shtorn suddenly becomes quiet at this point in the conversation and turns his face towards the window. He tries to speak but stumbles. He takes a deep breath and then tries again.

“It’s like when you upgrade your computer and see all the information you had disappearing and there’s nothing you can do about it. Our lives are about trying to build something but suddenly that’s all destroyed.”

Shtorn prefers not to discuss how he got from Russia to Dublin to protect the safety of his fellow LGBT activists back in St Petersburg. After two months in Ireland, and having investigated all options with legal professionals, Shtorn entered direct provision. Eight months on he feels deeply depressed.

Being gay in direct provision makes the wait even more challenging.

“Homophobia has nothing to do with race or religion but the toxic masculinity, which is also a kind of expression of fear, is very present in these types of closed communities. These people feel they are not living a proper life and so they express these frustrations through aggression. They are aggressive towards those who are weaker and more vulnerable and that’s LGBT people, victims of domestic violence and children.”

When Shtorn first entered direct provision he believed the best solution was to create a centre specifically for LGBT and other more vulnerable groups. However, after eight months in the system, he just wants the process to end.

“I think the direct provision system has to end but as a social scientist, and as a person of common sense, I understand it can’t end immediately. It takes a process of change. Right now there is a huge amount of public money being spent on making people unhappy. This is a public issue; it’s not just about people in direct provision. It’s about public understanding. So many people don’t even know direct provision exists but they are paying for it.”

Shtorn says there is very little public awareness around the additional barriers faced by LGBT asylum seekers. He recently set up a website called queerdiaspora.com where he hopes to share information of community groups and support organisations around Ireland that asylum seekers can contact for advice. He also hopes more Irish organisations will get in touch to share their resources.

In the meantime, Shtorn must continue the wait for his asylum interview. To clear his mind he often walks along the canal in Galway where he is living. He loves the city and hopes to stay there once his application is approved.

“There is such a lot of water here which really helps me. Sometimes I go to the canal and spend two or three hours just looking at the water. Water is full of life, just like people in direct provision. We are like the water in the canals.”