We’re not children. So trust us with grown-up debate

Laura Kennedy: Free-speech tussles turn on whether we can withstand disagreement 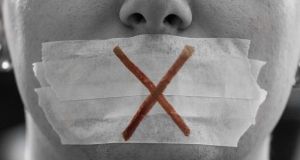 `We can listen to someone we disagree with and remain emotionally intact.’ Photograph: iStock

There is a general tendency to consider universities in some way intellectually and functionally separate from society as a whole. We think of them, in some cases accurately, as places where young people go to test the boundaries of the world view they accrued during childhood and adolescence. Those young people leave an environment delineated by the cultural, ideological, religious and other views of their guardians, and are suddenly exposed to new and multitudinous ways of understanding the world.

In theory, personal development and education are the focus of those years. Often, students will develop new interests in politics, and asking philosophical questions about concepts like fairness, identity, justice and human rights, using the skills they are taught at university to think about the issues and problems they see in wider society.

Eventually, though, as students graduate and go out into the workplace, or in much smaller numbers, go on to graduate school and become academics themselves, the dominant ideas coming out of our universities become powerfully influential on the wider social and political landscape.

Last week, Joanna Williams, head of education and culture at Policy Exchange and associate editor of Spiked Online, was invited to King’s College London (KCL) by the university’s Department of War Studies. Williams, who is known for her books Academic Freedom in an Age of Conformity and, more recently and controversially, Women vs Feminism, was there to have a conversation with Department of War Studies’ Prof Michael Rainsborough which would launch the department’s “Endangered Speeches” event series.

The series is intended to explore the changing climate on university campuses, in which a struggle over speech – who has the right to speak, when, how and on what issues – is affecting academic discourse and viewpoint diversity.

The KCL students’ union supported a campaign to have the event shut down, advocating no platforming Williams, and the university’s Intersectional Feminist Society issued an online statement also calling for the no platforming of Williams, and asked people to sign it in support.

The statement declared itself to be a step in the “fightback against King’s College London’s complicity in and apathy towards transphobia and misogyny”. The statement closed with the words: “We anticipate the redaction of her [Williams’s] invitation, cancelling of the event and public apology.” Retracting Williams’s invitation, it seems, would be insufficient. The university must also apologise publicly for the crime of having considered it appropriate to ask her to speak in the first place.

Though the event thankfully did go ahead, with some rather flaccid and half-hearted protest at the front of the building beforehand, this is concerning. In part, it is concerning because Williams should not be considered particularly controversial. She is a left-wing academic, not some furious neo-Nazi. She takes issue with aspects of modern feminism and identity politics, and thinks that gender and sex are connected. This certainly puts her at odds with many academic colleagues, but these are not unusual views, and they are not – even to those who disagree with them – particularly dangerous.

The issue, apart from presuming that people are so stupid and suggestible that they will unquestioningly swallow bigotry without resistance if and when they hear it, is the equating of speech with violence or harm. If words can be equivalent to physical assault, then we must restrict the way in which certain people weaponise them.

However, this represents an appalling infantilisation of adult minds, particularly those of women and minorities, who we are led to believe are so especially vulnerable to being harmed by other people’s language, they must be protected from it. Those who disagree with Williams had the option of attending the event to verify what she thinks and to challenge her, but they did not do so, because dialogue is not the point. Silencing dissent is.

With respect to Williams, she is not a savant of manipulation who can bend all wills to her perspective, and there is no evidence to suggest this is her aim. I left the event finding some of what she said convincing or useful, and some not. Judging by the conversations around me, so did others. Perhaps the protesters should have more faith in the ability of themselves and others to hear disagreement and remain emotionally intact.

Irish family stuck in Cyprus: ‘We hope our flights home are cancelled’
5

Food and drink quiz: Who is the only chef to be sued by a sitting US president?
9

Faces of the future: Some of the rising stars of Ireland’s black community
Real news has value SUBSCRIBE