New to the Parish: Filip Klubicka arrived in Ireland in August 2017

Filip Klubicka moved to Dublin in August 2017 to do a PhD in computational linguisitcs and also sings with an Irish a capella group called Ardu. Video: Enda O'Dowd 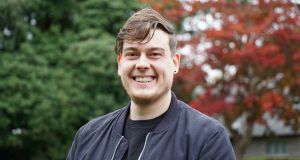 Filip Klubicka does not sound like a man who moved to Ireland only a year ago. His accent is much like one you might hear in a nondescript Dublin suburb, or on the pavements of UCD.

He certainly does not sound like someone who was born and reared in eastern Europe and has lived the majority of his life there, until now.

He moved to Dublin in August 2017 to do a PhD in computational linguistics and also sings with an Irish a cappella group called Ardú.

“I actually learned English as a kid watching Cartoon Network - I was obsessed with it! We didn’t have a lot of programming in Croatian so we obsessively watched Cartoon Network so I just picked it up,” he says.

He grew up in eastern Croatia in a town called Daruvar, which he describes as the “centre of the Czech community in Croatia . His mother, a school principal, is Croatian but his father, an art teacher, is Czech.

“About a quarter of the population there are of Czech descent. My dad’s family has a long tradition there.

“As a kid, my dad and his family would speak Czech to me whereas my mum would speak Croatian, so it was very much a bilingual upbringing. That helped with the whole language acquisition thing, just being around all that.”

Klubicka also learned German through TV cartoons and ended up studying English literature and linguistics at university in Zagreb.

Growing up in a small town in a conservative country was not always easy.

“It’s a really nice place, but it’s a bit close-minded, everyone’s fairly gossipy and God forbid you go outside the norm or be different - it was very stifling in that way. I was always kind of an outsider; growing up I was quite marginalised. I was a geek, straight As in school, and I was fat kid too! So let’s just say the school years weren’t the best.

“But then when I moved to Zagreb, the capital, for college, it’s much more cosmopolitan, much more open and accepting and I kind of found my people there.”

Reflecting on Croatia, he says the country has taken a swing to the right in recent years, becoming much more conservative at a time when Ireland has been moving towards a more liberal outlook.

“A couple of years ago (in 2013) we had a referendum to constitutionalise marriage as being exclusively between a man and a woman and it passed - so we’re going backwards”.

“Croatia is a very interesting place. Politically, and I guess culturally, the (Catholic) church has a lot of influence and power. There’s been this weird push in the last five to 10 years to bring back conservatism.”

Would it put him off returning home?

“Probably,” he says. “It’s hard to say because we can’t see where it (the conservative movement) is going. It’s not all bad but it is something I would definitely consider - I have four years here so it’s a long way away”.

He is not the only one of his generation moving away from their home country.

“I have friends working and studying in Munich, Norway, in the Netherlands and in America - so it’s not uncommon. Then I have some friends who are adamant about staying in Croatia and making the best of it - even though it’s not a terrible place, I swear! But I’m saying that because there is a prevalent opinion on a national scale (in Croatia) that everyone is leaving.

“So as a young person, because the work is so hard to get and so badly paid, you deciding to stay is almost a statement,” he says.

He does miss home, though.

“I miss the people mostly, I had a really nice community back home, lots of good friends and family and I was singing a lot so I do miss that aspect. But I don’t miss the attitudes, the mentality, the conservatism and the lack of money.”

There are some things, however, which make him feel like he hasn’t moved very far away from home at all.

“People in Ireland are very - let’s say - lax with time commitments, which is very similar to people in Croatia! Also the convoluted bureaucracy is something we also have in Croatia.

“I heard this story about how they put the new Luas in, and they were like ‘oh look at this it’s the new Luas, it’s the biggest tram in Europe’ and then it blocked up the whole bridge because it was too big, right? When I heard that I was like oh, this reminds me of home!”

Carving out an active social and musical life in Ireland has helped him settle in - he is part of the a cappella group Ardú and performing in a stage production of Rent, the musical.

“One of the first things I did when I came here was try find someone to sing with. I was in an a cappella group back home and a choir and a little band and I just wanted to find something similar so I literally just googled ‘a cappella Dublin’ and these guys (Ardú) popped up first.”

He sent them an email and it turned out they were looking for another singer as their tenor had just dropped out. He auditioned and got the job.

Since then the group have performed in Cork, Belfast, Limerick and all around Dublin; as well as recording an album this year which included a Croatian song, something which meant a lot to him.

A fellow member of Ardú suggested putting a Croatian song - called Naranca - on the album as Croatia has a very strong a capella tradition called Klapa.

“It’s a very specific style that originated on the coast. Traditionally it’s five men who are friends in a Mediterranean setting who are sitting after dinner singing in very close harmony.

“It’s very distinct, rhythm doesn’t really matter. It’s about melody and the theme is the sea, wine, the olive trees, we’re very proud of it in Croatia and it’s part of our heritage,” he says.

The tradition is largely coastal so the Croatian was not exposed to it at an early age, but when he moved to Zagreb he found lots of people who were “really into it”.

Ardú are growing in popularity, with their album Gravity reaching number one on the iTop Vocal Album Charts in Ireland last week.

Their next concert will be in Dun Laoghaire on December 18th, and they are planning a mini European tour for next year.

“I sing a lot back home, it’s a really important part of my life as a creative outlet, I feel like I can’t really imagine my life without some sort of music or singing. Singing with Ardú has been amazing, we’ve done so much.”