‘I was asked to play the national anthem on my flute. I felt honoured’

New to the Parish: Miriam Kaczor arrived from Poland in 2008 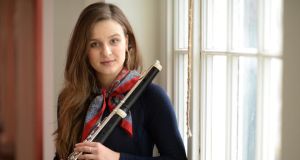 Miriam Kaczor: “Arriving into a new place where you see people having fun but you can’t join in was really tough. You go from being a really good student to getting bad grades. It was a lonely time.” Photograph: Dara Mac Dónaill

Two months ago, late on a Sunday evening in mid-September, Miriam Kaczor received an unexpected call. The young musician had travelled from London to attend her Irish citizenship ceremony and was in her parents’ home in Tallaght when the phone rang.

The voice on the other end of the phone line explained it was calling from the Department of Justice. Kaczor immediately panicked, fearing she had made some mistake on her citizenship application. Fortunately her apprehensions were unfounded. “They just asked, can you play the national anthem on the flute?”

The 23-year-old had recently moved to London to pursue a professional career as a flautist after winning numerous Irish classical music competitions over the years. She had played Amhrán na bhFiann a few times before, but stepping on the National Concert Hall stage the following day was different. She felt a rush of exhilaration as she held her cherished instrument to her lips and began playing the notes that for so many in the audience, marked the beginning of their new lives as Irish citizens.

“I felt honoured to be granted the trust to play the nation’s most important melody in front of the Minister, the Tricolour and with half the people standing up in silence as they became new Irish citizens. It’s amazing how you can play something so simple, that doesn’t take much effort, but has so much meaning. It was one of those moments as a musician when you realise you can spend hours practising all these really difficult pieces but in the end you get up and play a two-minute piece and that’s what’s important.”

It’s difficult to imagine that just over a decade ago, this confident young woman – who speaks English with a melodious Irish accent – arrived on this island without a word of the language. Originally from the Polish city of Szczecin on the German border, and only 150km from Berlin, Kaczor’s mother moved to Ireland when her daughter was 11 years old. The following year, after her mother had settled in the country, she arranged for her husband and two children to follow.

“Both my parents were teachers and the pay isn’t great in schools in Poland so they were struggling to make a living. My mam came over the year before to make sure it was actually possible for us to come here and check out schools.”

Kaczor recalls how her mother was walking down Grafton Street one afternoon, shortly after arriving in Ireland, when she spotted a girl carrying a flute case. She approached the student and asked where she took lessons. The girl brought Kaczor’s mother to the Royal Irish Academy of Music on Westland Row where she saw a poster for a flute concert. A few days later she attended the concert where she was introduced to the performer William Dowdell who also taught flute at the academy. Within a few minutes she had arranged for one of the country’s top musicians to audition her young daughter for the school.

Kaczor, who had already been playing flute for a couple of years, made a few visits to Ireland that first year to take classes with Dowdell who offered her a scholarship after spotting her talent as a musician. The family made the final move to Dublin in September 2008 and Kaczor was enrolled in a girl’s secondary school.

“It was really exciting at first but arriving into a new place where you see people having fun but you can’t join in was really tough. You go from being a really good student to getting bad grades. It was a lonely time.”

After two years the family relocated to a different part of the city and Kaczor moved to a school where she finally began to settle. “It’s a funny age to move at because I always say I spent most of my conscious life in Dublin because that’s when your external personality starts to form.”

After completing her Leaving Cert Kaczor began a full-time music degree at the Royal Irish Academy of Music in Dublin. She had considered studying medicine or art but says her love of the flute drew her towards a career in music. “I knew I’d regret it somewhere down the line if I picked something else. All my teachers warned me that it wouldn’t be easy and if I liked money, not to get into it. But I think it’s worth it, it’s so rewarding. I can’t imagine myself sitting in an office and the amount of satisfaction I get from playing is really unique.”

Last year Kaczor was awarded the inaugural RDS Jago award following her win at the annual Feis Ceoil music competition. The prize fund has allowed her to pay for tuition in London and also means she will play a solo performance later this month with RTÉ Concert Orchestra. Over the past year Kaczor has played a number of times with the orchestra but never a full concerto standing alone in front of the ensemble.

“It’s a bit scary to play in front of all those people who you know are of an award-winning standard. But it’s very exciting, someone at my stage wouldn’t usually get that opportunity.”

Kaczor is the only member of her family who has become an Irish citizen. She and her parents decided to submit the application because Kaczor increasingly needed to travel for work and often encountered long delays with her Polish passport. She was also worried about the uncertainty of travelling between Dublin and London post-Brexit. She says her time in London is “temporary” and dreams of moving back to Ireland and working as a professional musician in Dublin.

She still feels a connection with Poland but, following the death of her grandmother earlier this year, no longer has family living in the country. “I have always felt like I have two homes because in both places I feel a little bit foreign. When I’m in Dublin I have bits of me that are Polish but in Poland I’m slightly different to people over there. Even my accent is weird. I live in Tallaght but I don’t really sound like I’m from there as I’ve spent most of my time in the academy and all my friends are from there.”

She regards her Irish citizenship as “an invaluable, life-long investment” that has “put a seal on how warmly embraced I have always felt by the Irish culture and how it has inevitably become a part of my personality”

Miriam Kaczor will perform Liebermann’s flute concerto, accompanied by the RTÉ Concert Orchestra, at the RDS Concert Hall in Dublin on Wednesday, November 28th, at 7.30pm

Could a keto diet be bad for athletes’ bones?
9