‘When I said I’m Romanian, she literally stepped away from me’

New to the Parish: Daniela Kocis-Fitzgerald arrived from Romania in 2009 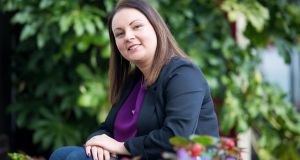 Daniela Kocis-Fitzgerald was standing at a bus stop the first time she personally experienced the negative stigma attached to being Romanian in this country. She had only been in Ireland a few months and was happy to engage when an older woman standing nearby struck up a conversation. The pair spoke for a few minutes before the woman asked Kocis-Fitzgerald where she was from. “When I said Romania she literally stepped away from me. I just thought, why? She obviously didn’t understand.”

“It was a harsh wake-up call. Even now when I say I’m Romanian people kind of look at you in a weird way. The fact that lots of TV shows about Romanians have appeared doesn’t help. But they don’t show the reality of my country, it’s very much fabricated. It’s like a camera crew going to Dublin and only filming the poorest areas, then saying this is what all of Ireland is like.”

Kocis-Fitzgerald was born and grew up in the town of Aiud in the region of Transylvania in central Romania. An only child, she grew up speaking Hungarian with her father and Romanian with her mother. When she was 15 she chose to attend boarding school so she could study English.

“I’ve always been quite ambitious and adventurous. It probably takes a certain type of person to move away at that age, you need to have your head on your shoulders. My parents also made the effort to provide me with opportunities which I think gave me the drive to do different things. They let me be independent and trusted my judgment.”

At the end of the day, you’re in a different country and need to be a part of the community

While at university she decided to spend a summer working in the United Kingdom. She really liked the country and ended up moving to Blackpool. “It kind of opened my eyes to the fact that there were many more opportunities outside Romania. Blackpool was fun because I was young and everybody there was my age. I also visited Ireland a few times and always liked it. I found the people here welcoming and also quite traditional. It was the same as Romania where people are still quite traditional and this appealed to me so I decided to stay for a while.”

Kocis-Fitzgerald moved to Carlow in 2009 and found a job in retail in nearby Kilkenny. “It was quite sheltered in Carlow in the sense that I was in a Romanian community and until I got my first job most of my interactions were with Romanians. But now I always tell people who come here to try and leave that mentality of always staying with Romanians because at the end of the day, you’re in a different country and need to be a part of the community. It took me a good few months to understand that I would never be truly settled here unless I embraced the culture and the country, with all its good and its bad.”

From Carlow, she moved to Arklow for work and then on to Dublin. In the meantime, she met an Irish man called Richard. “I met him on a night out back in 2010 and he’s played a huge role in my decision to stay in Ireland. He’s my biggest champion and always encouraged and supported me when I was studying.”

In 2013, Kocis-Fitzgerald became pregnant with her first child. She continued to work full time throughout the pregnancy while also attending college and completed her final exam just weeks before her son Liam was born in June 2014. The following year the couple were married in two wedding ceremonies – one in Dublin and the other in Romania – and two years later their second son Oliver was born.

Why would you punish somebody for coming from a different country? I’m not here to do anything bad, I’m here to work

The family now live in Clonee and Kocis-Fitzgerald recently started her own HR business after studying and working in the area. She had become worried that her long hours working in Dublin’s city centre combined with the commute to and from work was turning her into a “weekend mom”.

“Having my own business has always been my ambition but my decision to do it was probably mostly for the kids because I wanted to see them. Now I can tailor my schedule to suit them and Richard. I don’t want them feeling like they were brought up in a crèche, that’s not fair on them. You have to take responsibility for your own kids and for your own life. It was a way of blending both my aspirations for a career and to be a mom.”

Kocis-Fitzgerald is grateful to her husband for encouraging the boys to speak Romanian at home. “He insisted on them learning both English and Romanian because he’s seen how much bilingualism has helped me. It would have been an issue if I met someone who didn’t like my heritage but he is so open about the kids going to Romania.”

Kocis-Fitzgerald has also started organising seminars for Romanian women who have recently arrived in Ireland, giving advice on how to put together a CV and apply for jobs. “I think the biggest problem is the language barrier but also the mentality many women have that they’re coming from Romania so they shouldn’t look for a big job. I’ve met so many ladies with great qualifications but they do not have the self-belief to go for it and choose low-paid jobs.

“The message I want to get across is at the end of the day it doesn’t matter where you come from because you’re a person and you will find opportunities if you give yourself the chance. There are lots of Romanians who have their own business and who are very well established and it’s about having that belief in yourself.

“At the end of the day we are all humans. It doesn’t matter where you come from. Why would you punish somebody for coming from a different country? I’m not here to do anything bad, I’m here to work. The amount of times I’ve heard people say over the years that I’m here to take their jobs. How am I taking somebody’s job? I run my own business.”