‘We offer tea and abuse.’ The Cork shop that’s like no other in Ireland

A constant in a changing Ireland, Tim Forde is the latest in a long family line to serve his town

Tim Forde is the latest in a long family line to serve the people of Mitchelstown from his eclectic shop. Video: Michael Mac Sweeney/Kathleen Harris 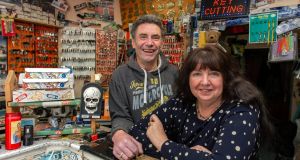 “It was only the one shoe, it wouldn’t be much use to anyone else,” says the lady at the counter.

Behind it, Tim Forde is on a mission to find the mended piece of footwear.

“Relax now a second,” he tells her, “I only had it in my hand a few minutes ago. Now where did I put it?”

The shoe-repairing, key-cutting, vintage-car-restoring, motor-bike-driving father-of-two has a system in place – though you wouldn’t necessarily think it.

In his quaint shop that would give decluttering guru Marie Kondo a heart attack, there are shoes mounted on top of each other, a seemingly infinite number of keys strewn across the counter and workplace, and a mind-boggling array of odds and ends available for sale.

A picture with three Elvis’, from the three stages of his career, sits alongside a Parisian scene of a car driving through the fog – its battery-powered headlights shining.

There’s no particular plan to the walled displays – just how the owner of Forde’s likes it.

Eventually, Forde finds the boot. It’s buried beneath a mountain of others. Not that the customer seems to be in any particular rush. It’s a Thursday evening and the living is easy around these parts. And she’s delighted to see her fur-rimmed black boot restored to working order.

He’s the third generation of Fordes to operate a business from these premises – a three-storey block of buildings built in the late 19th century on Mitchelstown’s Upper Cork Street.

“My grandfather Tim and then my father Donal after him had a hardware store here. It initially opened around 1907. We lived above the shop and still do. We sold toys too. I used to do stitching but stopped that after my father passed away 11 years ago. When I took over the business, I decided to offer key-cutting and other services as well but don’t really sell all the hardware anymore,” he says.

He shows me his first key-cutting machine. A small green device which required manual spinning. “It cost me £11, I think. Sure, I was very young when I got it. It would take about 15 minutes to cut a key, now they can be done in 15 seconds. When we started using this, the customer would drop the key into the shop today and come back for it tomorrow. Life is a lot faster now.”

And while Forde’s no longer sells a wide array of hardware items, this is the place to come in north Cork if you want to buy a high-quality mousetrap, bowsaws, potato mashers, plate hangers, walking sticks, an old-style hot water bottle or a lamp for underneath the Sacred Heart picture.

“I like to stock things you can’t really get anywhere else,” explains Forde with a twinkle in his eye. He adds: “the kind of things that catch people off guard.”

In the window are fake baked bean cans, candles and rocks which double as places to hide your money. He orders them from a catalogue and he says the customers snap them up.

In his early 60s, the Cork man has known little else but life on this street. “I’m hardly going to move now, I know nothing better. I stayed around all the time and have never really been outside of Ireland, even for a holiday,” he tells me with a contented smile.

A father to two sons, Michael and Anthony, he’s designed his shop to mirror his many interests and it’s full of quirks and items you wouldn’t expect to find in such a business.

At the counter, a plastic skull with a red button on it invites customers to press for service. But when I do it leaves out a high-pitched scream and a tongue jets out from the mouth. Forde roars with laughter. “It never gets old,” he says.

Over the course of the afternoon customers pop in, many just for a chat.

“We offer tea and abuse,” he jokes. And there’s even a pack of digestive biscuits on the counter for customers’ dogs.

“We don’t give them the chocolate digestives,” explains Forde’s wife Ann, “only the plain ones. The chocolate wouldn’t agree with them.”

Tim met Ann, from Bartlemy, at the Top Hat dance hall in Fermoy in 1981.

“Its Riordan’s SuperValu now,” he explains, “ so now they sell nappies to those who met in the old dance hall,” he jokes.

The couple blush and giggle as they recall their courting days, but the moment is interrupted as another customer steps in out of the autumnal chill.

The young man, a regular and friend, is in need of a padlock for an oil tank. He’s not sure what kind of device to buy. Forde tells him to try a particular type of lock, advising him to return if it’s not suitable.

“If it doesn’t fit sure you can bring it back and try another one. I’m not going anywhere,” he says.

With a wolf displayed on his tee-shirt and his late mother’s blue-stoned ring on his finger, Tim Forde isn’t your average key-cutter.

For him, recycling and repair is not just his job, but his hobby too.

When he’s not grafting in his store, he can be found hitting the open road on his motorbike or showing love to his collection of vintage cars.

Youngest son Anthony pops in to proudly show me a picture on his mobile phone from his recent debs ball, his father having dropped him and his date to the Rochestown Park Hotel in a dark green 1934 Baby Ford.

“I love working away on things and getting them back in good order. It’s always been my way. If something can be rescued rather than replaced, I’m interested. Nowadays, people buy things and chuck them out the minute they stop working. But with a bit of love and attention they can be useful again,” says Forde.

And with his wild, high-pitched but warm laugh he adds “a bit likes ourselves”.